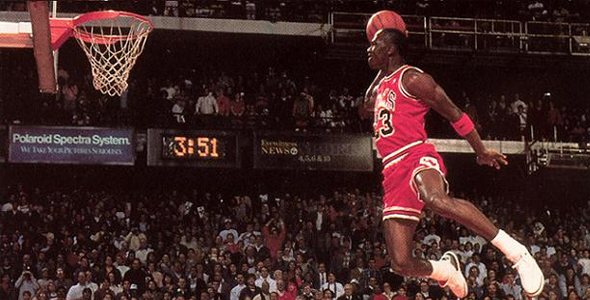 How many of you out there grew up playing NBA Jam and wished they had a Michael Jordan character so you could control a player with the G.O.A.T.’s skills? I always just wanted to see what his levels would have been in the game’s player selection area. He would have had to have been full power on all skills right? Maybe, slightly less than full power on three’s I guess…

Well if you always wanted to ‘be like Mike’ in a game simulation, you may just get your wish after all. According to an ESPN source, the producers of NBA 2K11 have signed ‘his airness’ to be the cover boy. What makes this especially interesting, is the contract would stipulate the need for a Jordan playing character in the game. It is also worthy of note that Jordan still topped Lebron James, Derrick Rose, Tyreke Evans among others for the cover spot, even though he’s no longer even an active player. This would be a first, and also as the new owner of the Charlotte Bobcats, it would be the first time an NBA franchise owner has graced the cover of an NBA videogame.

While rumors pegged LeBron James, Derrick Rose and even Tyreke Evans as favorites to appear on the cover of “NBA 2K11,” multiple sources have told ESPN that the company has gone in a completely different direction, signing basketball legend Michael Jordan as its new spokesman.