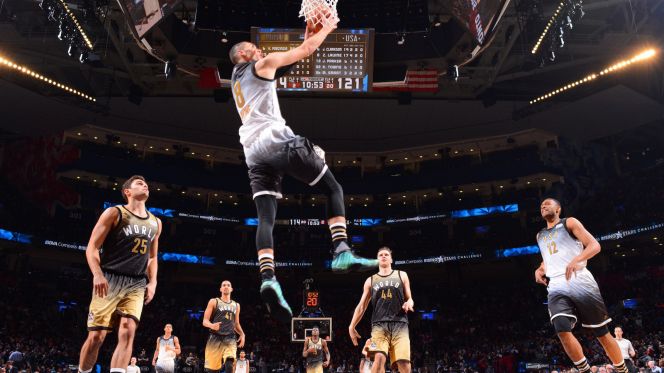 While the celebrity game is a cute way to engage the most casual of basketball fans, I never considered it apart of All-Star Weekend. From my few years experience, it is never in the NBA arena of that city and there is always overlap between the end of this game, and the start of the Rising Stars Challenge game.

For the second year in a row, the BBVA Rising Stars Challenge pitted a team of combination rookie and sophomore international players against 1st and 2nd-year NBA players from the United States. The mesh of players led to a combination of athletes across the sportswear brand spectrum.

Andrew Wiggins kept it clean going with the Canada-themed ‘Marita’ adidas Crazylight Boost 2.5; a Player Edition that the Stripes recently released on the low. He also started the game in a black/gold Crazylight Boost 2.5 colorway adidas made especially to hook up to the Team World uniforms.

Emmanuel Mudiay brought out a red colorway of the Under Armour Fire Low. Two different editions of the Nike HyperLive were seen as well.

Nike had the strongest showing with 13 players in Swoosh sneakers (14 if you count Jabari who wore the Jordan CP3.IX).

Clint Capela, Nikola Jokic, and Dwight Powell all wore a never-before-seen green-and-orange colorway of the Nike HyperLive & LeBron Soldier IX that featured the same print. Karl Anthony-Townes laced up a corresponding colorway of the current Nike Hyperdunk as well.

Take a look at the three best sneakers seen during the BBVA Rising Stars Challenge.

@ZachLavine8 throws it down during the #BBVArisingStars game at the 2016 @NBAallStar Weekend in Toronto. #BensNBAsneakerCards x #THDkicks

Andrew Wiggins (@22wiggins) in the 'Marita' @adidasHoops Crazylight Boost 2.5 during the #BBVArisingStars game at @NBAallStar in #Toronto. #BensNBAsneakerCards x #THDkicks