NBA May Add More Space Along Baseline of Court

Anou Enright July 16, 2015 Rumors No Comments on NBA May Add More Space Along Baseline of Court 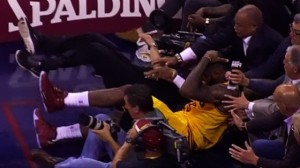 It’s a wonder something as severe as Paul George’s leg injury hadn’t happened sooner. Granted, that did not take place in an NBA arena, but the basket stanchion, camera people, scorer’s table and fans are all way too close to the court. There’s not much real estate for a player to break up before toppling into the stands, or into a camera as we saw with LeBron James during the Finals.

But maybe the league is looking in to changing this. Adam Silver said that the space between the court and everything else may need to be widened. This is extremely overdue.

Adam Silver said Tuesday that a proposal was presented to the Competition Committee and Board of Governors to create additional escape lanes for players.

Under the proposal, on which the league consulted with the National Basketball Players Association, the escape lanes on either side of each basket stanchion would be widened by a foot. Also, an additional escape lane would be created on the other side of that first camera position on either side.

“We think it’s necessary,” Silver said. “… It’s a constant balance we’re looking to achieve in terms of getting those great images out to our fans around the world, allowing the media to appropriately cover our game and finding the right balance for player safety.”