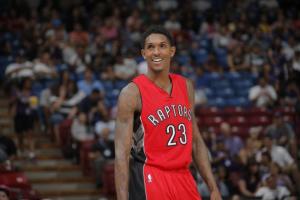 The Raptors were one of the surprising teams in the East, but their first round sweep at the hands of the Wizards was a huge disappointment. Part of the reason for their success during the regular season was the play of Sixth Man of the Year, Lou Williams. He proved the spark the second team needed.

Williams is now a Laker after he failed to reach an agreement to remain in Toronto. But that’s not because Lou didn’t try. According to him, he gave the Raptors the opportunity to sign him, but they didn’t want him.

Speaking on Tim and Sid on Sportsnet on Monday, Williams admitted he was “kind of a little disappointed I wasn’t allowed to stay in Toronto, but things happen, you move forward.”

Williams said he even offered the Raptors a chance to match the Lakers deal, but Masai Ujiri and Co. told him to take the offer.

“I think the playoffs just left a sour taste in everybody’s mouths,” Williams said, before adding, “we were all disappointed with how the playoffs ended. When things like that happen, you don’t know what to expect. I really wanted to be a part of what they were building there.”