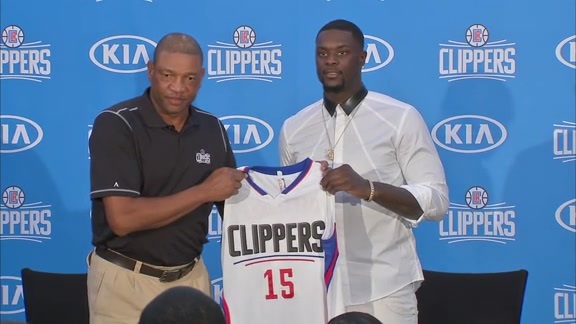 He’s heard them. He’s read them. He knows a good chunk of the outside world believes he’s a locker room cancer, this player who, while talented, is a wild card on the court and liability off it.

Now a member of the Los Angeles Clippers, he wants those rumors to stop. Because as he told reporters at his introductory presser, they’re just rumors, fabricated fantasies, not traces of the truth.

“I’m going to work hard this season to get those rumors out,” Stephenson said as he was formally introduced as a Clipper at a news conference at the team’s training facility on Thursday. “That’s not the issue. I’m very good in the locker room. You can ask all the players that I’ve played with. You can ask the coaches. I’m very good in the locker room.

“When I’m on the court I got that type of energy where it looks like I’m yelling at somebody. But when I talk to my teammates it amps them and makes them work harder. I want to take that [negative] title off my name because that’s not me. I’m a good locker room guy.”

The locker room rumors with Stephenson have always seemed fairly flimsy. You weren’t hearing anything overly destructive while he was with the Indiana Pacers, operating as Paul George’s No. 2. It wasn’t until he joined the Charlotte Hornets last year and had a season to forget that the locker room stuff took center stage. And even then, despite knowing about Stephenson’s on-court antics and abrasive personality, you had doubts.

Coach Steve Clifford specifically would make it seem like the scuttlebutt was nothing more than falsified fodder. Stephenson was just struggling. He was playing poorly, yes. He was a contractual bust, yes. But he wasn’t harming the Hornets emotionally. That’s not how it seemed.

Playing for the Clippers will be a good test either way. Their locker room is special in that it houses two vocal leaders. Doc Rivers and Chris Paul won’t let certain shenanigans fly. They run a tight ship. Especially Paul, who has at times been depicted as a tyrant, a stringent chief incapable of lowering his intensity levels.

That kind of teammate could be tough to play with. Paul is demanding, and that’s undoubtedly rubbed some the wrong way over the years.

But Stephenson, all of 24, needs that pecking order and structure. This may be his last chance to shed prevailing perception, not just in the locker room but on the floor. And running beside Paul, as well as Rivers, should, if nothing else, keep him focused on the task at hand.