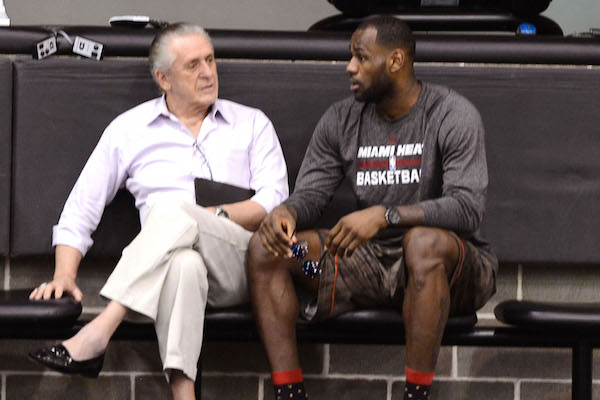 LeBron James is no friend of the Miami Heat.

Yes, he won two championships and a pair of MVP awards in South Beach. And sure, he made four consecutive Finals appearances and was on the brink of forging a dynasty in 2014.

But he is still no friend of the Heat, at least outside of Dwyane Wade, after the possible stunt he pulled just before re-signing with the Cleveland Cavaliers last summer.

There is this insulted feeling in the Heat organization that James used Riley as legendary leverage at the end, as a public pawn, flying him across the country and making him wait in Las Vegas for a short meeting with an already-determined outcome — so James’ men could negotiate all the power they wanted from Cleveland in the interim with the very public lie that Miami was still in play — and to show Riley who was really in charge. That may or may not be accurate, but this is: James, the paradigm shifter, didn’t look like he was working for the owner, general manager and coach in Cleveland as much as it looked like they were working for him.

Le Batard does admit that none of this may be true. The Heat absolutely still feel slighted, but there’s no guarantee LeBron leveraged them against gaining the absolute control in Cleveland that he so clearly enjoys.

It is interesting, though, how LeBron is being viewed after losing to the Golden State Warriors in the NBA Finals. Most lauded him for his performance in that six-game set, to the point where criticizing his legacy, as has been the standard to some degree after every failed championship bid, is taboo and shortsighted.

In lieu of legacy criticism, there have been attempts to paint LeBron as a ruthless businessman, as this corporate tyrant who disrespects head coach David Blatt regularly and enjoys it, and who has indomitable power over everyone else in the Cavaliers organization, from teammates to general manager David Griffin to owner Dan Gilbert.

And those depictions could be accurate. Or half-accurate. Or totally false. There does seem to be a shred of truth to the rumors, however manufactured they may seem. But the point is, LeBron cannot be anything less than perfect if he wishes to avoid criticism. Once the playoff losses pile up, the detractor floodgates open, and something, anything, is used to taint perception of the player and leader and business man he’s become.

These particular portrayals of LeBron—which, again, may be wholly accurate—just haven’t been as successful.

More and more people are coming to his defense, accepting that he has earned and deserves his present power, resenting the fact that anyone could use his purported closed-door power plays as a means to cut him down from the pedestal upon which he sits.

And yet, on some level, they’ve been successful. We’re still here, you and I, entertaining the idea that LeBron, underpaid though he may be in the grand scheme of things, is a behind-the-scenes manipulator of fate and, dating back to his time in Miami, rejector of any authority that doesn’t call the space between his ears home.