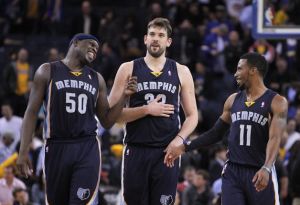 After taking care of the Los Angeles Clippers, 90-87, last Monday night, the Memphis Grizzlies had quietly recorded the 3rd best record in the NBA this season at 42-16 (72.4%), just behind the 47-12 Atlanta Hawks and the 45-11 Golden State Warriors.

In that hotly contested game, Chris Paul powered the Clippers on both ends of the floor with 30 points, 10 assists, 2 steals, and 2 blocks, but lost the ball to Grizzlies point guard Mike Conley in a costly turnover in the final 1.9 seconds that cost the Clippers a shot for the win.

Clippers fell down by 8 points with just over 2 minutes left in the game. It seemed like the game was over, but L.A. mounted one final charge on the backs of timely defense, a 3-pointer by J.J. Redick, and a turnaround 15-foot jumper by Paul.

In the end, the Grizzlies pulled off two come-from-behind wins in a back-to-back situation against the Portland Trailblazers last Sunday and the Clippers last Monday.

Great Grizzlies’ defense and inefficient Clippers’ offense in the final seconds was the difference, but the Grizzlies also outscored the Clippers in the paint, 40 to 26, and the Griz also shot 14 more free throws in the game.

On Friday the Grizzlies met the Clippers for the second time in five days. They played each other to a 41-41 tie in the first half, although the tempo favored the Grizzlies. Early on, it seemed the Clips were making the same mistake as Monday, relying too much on Chris Paul in the absence of Blake Griffin.

But, the Clippers started the 3rd period with a strong scoring burst, to take a 7-point lead, which they never gave up, finally pulling away 98-79. Led by a balanced scoring attack, of Paul (19), Jamal Crawford (19), Redick (18), and DeAndre Jordan’s 15 points and 22 rebounds, the Clippers won the game and the rebounding battle 47 to 41.

The Clippers and Grizzlies meet again April 11th in Los Angeles for one last grudge match before the playoffs.

Although it’s an old adage in the NBA that defense wins champions, but it sure seems like a modern trend, and the Grizzlies are the unsung defensive juggernaut of the NBA this season. No one wants to meet this team come playoff time, especially not the Clippers or the Spurs, who have both lost (and won) series against the Grizzlies in the past.