DeMarcus Cousins: This Season Has Been “a Circus”

Anou Enright March 24, 2015 Rumors No Comments on DeMarcus Cousins: This Season Has Been “a Circus” 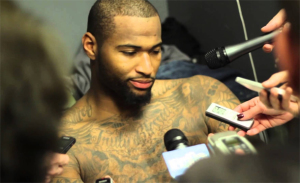 On paper, the Sacramento Kings don’t have a terrible roster, but it will be tough for them to even make the playoffs out west. Couple the struggles in the West with a coaching change mid-way through the season and you have a tumultuous year.

DeMarcus Cousins agrees, as he thinks this season has been nothing short of a “circus.”

“It’s been a circus, man. It’s been a complete circus,” a flustered Cousins said, when asked to describe this season. “We got off to a hot start. Unfortunately, I got sick, so it ruined the look of the team. I take some blame for that. I know for a fact, if I wouldn’t have gotten sick, things wouldn’t have happened the way it happened. It was no way it could. At the same time, a lot of it is not my fault and we all know why. But this has been a disappointing year.”