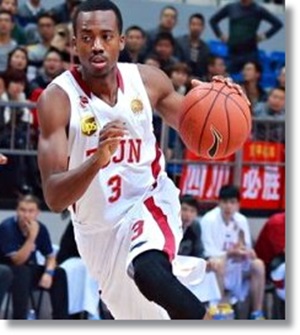 It has been a rough go of things early for former NBA Lottery pick CJ McCollum of the Portland Trailblazers, suffering through injuries and a lack of playing time, but things couldn’t be better for his older brother Errick, who just set the CBA individual scoring mark, tallying an amazing 82 points in a game in China.

Just 2 seasons ago, former Rutgers star Quincy Douby went off for 75 points in a game to set the CBL mark, until McCollum broke the record, going 21-35 from the field, sinking 25-27 free throws, and 4-14 on threes, to go with 10 rebounds, 4 assists,and 2 steals.

The 6’2 point guard scored an impressive 82 points but it wasn’t enough for his squad, the Zhejiang Bulls, to secure a victory over CBL powerhouse Guangdong Tigers, led by former NBA great Will Bynum, who won their 26th straight contest.

Just like his more famous younger brother, Errick McCollum began his high school career in Canton Ohio, playing on the same varsity team as Kosta Koufos, before starring at Division II’s Goshen College, finishing as the school’s all time scorer.

Despite being named a DII First Team All American in 2010, Errick went undrafted and has bounced around Europe, playing in both Isreal and Greece, before finding a home in China this past season.

He did get a cup of coffee with the Denver Nuggets in the 2014 NBA Summer League in Las Vegas but failed to make their regular season roster.

Maybe now the 27 year old scorer will finally get another chance to make an NBA roster following his record setting scoring display.  Check out all 82 of Errick McCollum’s eye-popping 82 points….