Top 10 NBA Backcourts: By The Numbers 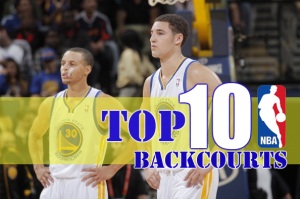 This season, Wizards shooting guard Bradley Beal told USA Today that himself and Wall are, “definitely the best backcourt in the league.” But, after his dismissal from the Warriors, former Head Coach Mark Jackson called Klay Thompson and Stephen Curry the, “greatest shooting backcourt in the history of the game.” Since then, the question of which team owns the best backcourt has been hotly debated. And, with so many great backcourts right now, it’s easy to see why.

Before we begin, there are so many devastating backcourts this season, there are a lot of dynamic duos that didn’t make the list: Miami’s Mario Chalmers and Dwayne Wade, Utah’s Trey Burke and Gordon Hayward, Atlanta’s Jeff Teague and Kyle Korver, and Milwaukee’s Brandon Knight and Giannis Antetokounmpo.

A simple formula was used to rate overall guard efficiency. Each starting backcourts combined points, assists, and steals minus their turnovers help to measure their combined effectiveness, or [ppg+apg+spg-tpg].

Chris Webber recently told Suns guard Isaiah Thomas that C-Webb thinks the Suns boast the best backcourt in the NBA, but their starters barely make this top 10. Since returning to the Suns in 2012, Dragic has blossomed into an efficient and consistent double-digit scoring threat, scoring a career-high 20.3 ppg last season and dropping a career-high 7.4 dimes the season before that. The Houston Rockets, who desperately need an upgrade at point guard if they want to make some noise in the playoffs, are reportedly targeting Deron Williams and Dragic.

Bledsoe, too, has come alive since joining the Suns, about doubling his scoring, assists, and steals.

Off the bench, Dragic and Bledsoe are backed up by Gerald Green, 14.0 ppg, and Isaiah Thomas, 14.8 ppg and 3.7 apg, 1.0 spg. So, if you’re talking four-deep, the Suns probably do have the best backcourt, but certainly not the best starting backcourt. Although the Suns are playing good up-tempo basketball, they are too guard heavy and do not have enough defenders and shot blockers to be a threat in the playoffs, especially going in, as they are now, as the 8th seed. Good thing the Suns acquired Brandan Wright to fill that shot blocking role. The Suns backcourt comes in at 40.8 (ppg+apg+spg-tpg).

Holiday and Evans have underachieved since joining the Pelicans, but their athleticism on the defensive end and unselfishness on offense has helped the Pelicans improve to the .500 mark (18-18) and the 14th most unselfish team in the NBA. The Pelicans backcourt: 42.09.

Rondo’s scoring and three-point shooting have improved since joining the Mavs, which is no mystery. Playing with Dirk Nowitzki and the talent around him, Rondo is open more than he has been in years.

As the 36-year old Nowitzki ages, Ellis is now the motor that runs the Mavericks. Ellis leads the team in scoring, gets the second-most steals, and second-most assists. And, the Mavs have played well since acquiring Rondo, despite dropping a 108-95 stinker against the Detroit Pistons. They held Rondo to 6 points, and Ellis to 16 on 6/17 shooting. The Mavs backcourt: 42.78.

He’s back…to earth that is. The former MVP Derrick Rose is a shell of his former self. He’s able to make some clutch shots, perhaps like Brandon Roy did even as he declined. Rose’s assists to turnover ratio (1.5) leaves a lot to be desired, since he trails Butler, Mike Dunleavy, Joakim Noah, and Kirk Hinrich in that area. Chris Paul’s ratio, by contrast, is 4.6. Unless there is more rehab and more improvement, this is not, nor will ever be the MVP Rose again. Despite his poor shooting, Rose has made a solid contribution on this 4th place Eastern Conference team.

Fortunately for the Bulls, Jimmy Butler has taken his game to an All-Star level, becoming like a better-scoring Kawhi Leonard. The Bulls backcourt: 44.16.

Wall continues to lead his team, now 2nd in the East at 25-11, as he makes his case for another All-Star selection. To add to his case, Friday night, Wall and the Wizards finally beat Derrick Rose’s Bulls in a 102-86 rout.

Beal has a similar game to Klay Thompson last season, but Beal’s shooting percentage leaves something to be desired. In regards to Beal’s comment about which teams has the best backcourt, Warriors guard Stephen Curry responded, “everybody’s got to be confident.” But, the Wizards backcourt trails the Warriors in production, tallying only: 43.47.

Lillard started the season slowly, but seems to be regaining his All-Star form, while playing very efficient basketball.

Matthews hasn’t missed a game this season, and he’s putting up career-high numbers in points per game. The Portland duo: 45.66.

It’s been an odd season for James Harden. The scoring phenom has had his shot rejected by more than a couple defenders, undeterred by his sly step and his dazzling euro-step. Harden has been held to 16.0 or less ppg in games against the New Orleans Pelicans, the Los Angeles Clippers, and Phoenix Suns. Yet, Harden’s remarkably efficiency has him ranked 5th in league, behind Anthony Davis, Russell Westbrook, Kevin Durant, and Stephen Curry.

Mainly due to Paul’s excellence, this ‘duo’ earns this high ranking. Redick finally seems to be fitting into the Ray Allen-type role Coach Doc Rivers had once envisioned, averaging a career-high in scoring. And, Paul is putting up another amazing season. The Clippers’ starting backcourt averages the fewest turnovers (3.4 tpg) of any duo on this page. Clippers’ rank: 47.89.

Tenth year guard Kyle Lowry is also having a breakout season and deserves serious All-Star consideration. Forget that. He deserves to be an All-Star, end of story. Lowry is posting career-highs in points, assists, and rebounds. He’s never been an All-Star, but it looks like his time.

After recovering from injury, DeRozan is regaining his form, but shooting a career-low. The backcourt of the Raptors has led them to a 25-11 record, 1st in the Atlantic and 2nd in the Eastern Conference. Their scoring and distributing mainly give them a rating of 48.95.

Curry’s shooting and handles are the tops in the league, like a quicker and better scoring Steve Nash. Check out this sweet handle Curry showed off recently in a game against the LeBron-less Cavaliers.

After his experience with Team USA, Thompson has taken his game to a new level with his increased confidence and ability to mix it up on offense and do more than just shoot from distance. His backcourt teammate Curry calls him, “almost impossible to guard if he can [put the ball on the floor and make plays]

The Warriors are 1st place in the West and the Pacific Division at 29-5. Combined the two guards score more than any other tandem (44.5 ppg) and are second in steals behind John Wall and Bradley Beal. Warriors backcourt: 53.56.

A simple formula was used for this rating. Each starting backcourts combined points, assists, and steals minus their turnovers helped rate their combined effectiveness, or [ppg+apg+spg-tpg].