admin November 20, 2014 Blogs No Comments on Kobe Says Nice Things About Dwight…Sort of 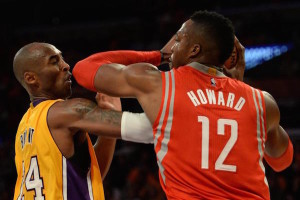 It’s amazing the impact winning can have on someone’s attitude and general demeanor.

Take Kobe Bryant, following the Lakers’ surprise 98-92 victory over the Rockets Wednesday night. No one saw it coming. Sure, Dwight Howard didn’t play as he tended to a sprained knee, but still. It was a pleasant shock for those in Tinseltown who have withstood volume losing for all of 2014-15.

Kobe was, in fact, so happy afterward that he basically complimented Howard, his arch nemesis—with whom he shared words in the two teams’ first meeting— as created by the media and Howard’s decision to leave Los Angeles for Houston. Here’s what Kobe said, courtesy of ESPN Los Angeles’ Baxter Holmes:

Bryant was asked after the game whether he considers Howard to be a “p—y,” the term Oklahoma City star Kevin Durant was overheard calling Howard during a recent game.

“No, I don’t feel that way. I don’t think Kevin does, either,” said Bryant, who scored a game-high 29 points against the Rockets. “In moments of confrontation during a game, you’ll say things in the heat of the moment.

“I know Dwight. I’m sure Kevin does. We don’t really feel that way about him. It’s like when you get in an argument with somebody, you’ll say things out of frustration, out of anger, that you don’t really mean.”

“Heat of the battle, heat of the moment,” Bryant said of his comments. “You [reporters] have all been in arguments, you guys that are married. Sometimes you say things that you wish you could take back that you don’t really mean. But it’s in the heat of confrontation, and sometimes things come out.”

So, there you have it. Kobe doesn’t think Howard is the word that rhymes with wussy. It’s like he’s giving his former teammate a giant, lasting hug. Seriously, upon reading this, I wonder if Howard would cry. It’s just so touching.

I also wonder what Kobe would have said following a Lakers loss, whether it was close or not. Talk to him after such a letdown. See what he says then. Will he still be hugging Howard? Or would we get another answer that ranges from…

“Nah, he’s more of a turncoat P.O.S. who couldn’t lick my shoes after a six-hour, shit-stomping session that ended with me having 76 tobacco-chewing addicts spitting all over the laces.”

In all non-ridiculousness, though, it’s good to see Kobe being diplomatic. A lot of what he says makes sense. People fight. They quarrel. They yell things. They call each other names. They get all up in each other’s grills.

Then, sometimes almost a month later, they make up, with words bordering on complete and utter indifference acting as a big bear hug.