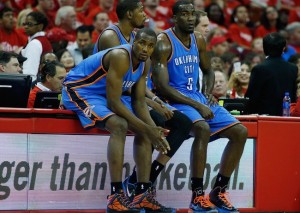 The OKC Thunder will have to weather the storm for a few months until they get back either Russell Westbrook or Kevin Durant back from injury. Until then, offense will need to come from somewhere. Reggie Jackson thinks he’s the guy apparently. In a recent loss to the Nets Jackson’s trigger-happy play gut under the skin of Kendrick Perkins and Serge Ibaka. So much that they froze Jackson out by not giving him the ball. Jackson has made it clear that he’d like to be a starter elsewhere and is using this time as some sort of audition.

He played selfishly at times in his season debut at Brooklyn on Monday, putting on a one-man show and what seemed to be a dribbling exhibition designed to search for his own shot. He finished with a game-high 23 points but took 20 shots. Perry Jones and Serge Ibaka, the next two highest shot takers, had 12 and 11 shot attempts, respectively. Jackson had five assists but committed five fouls and seven turnovers.

Ibaka and Kendrick Perkins grew frustrated with Jackson by the third quarter. Both big men began freezing out their point guard, refusing to pass him the ball to lead the break following defensive rebounds.

After the game, Thunder coach Scott Brooks even publicly criticized Jackson for not moving the ball.

Perkins wasn’t proud of his actions, either.

“Just let the game come to you,” Perkins said about Jackson. “But with myself and with Serge, we got to do a better job with our body language and leadership skills, because I didn’t like the way I acted in the Brooklyn game as far as my body language toward Reggie. But we know Reggie means well. We support him. He’s one of my good friends off the court. So it’s no harm in that.”