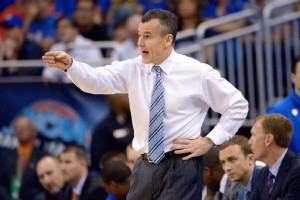 The search is on.

Less than two days after stunning the NBA by winning the draft lottery, despite a paltry 1.7 percent chance of doing so, the Cleveland Cavaliers have turned their attentions to finding someone to replace the departed Mike Brown. And according to ESPN’s Brian Windhorst, their search has led them to Florida’s Billy Donovan:

Donovan said Thursday that several NBA teams had called him about openings in recent days but that he still plans to be with the Gators next season.

He declined to specify which teams called — Detroit, Golden State, the Los Angeles Lakers, Minnesota, New York and Utah also have openings — and jokingly cited his brief stint with the NBA’s Orlando Magic in 2007 as reason for keeping details private.

“I have spoken to a couple NBA teams, and that’s all I’m going to say,” Donovan said. “It’s always flattering, but at the same time, I’ve always said that I’m very happy here and like it here.”

To hell with filling their void down low with Joel Embiid, or their need for athleticism on the wing with Andrew Wiggins or Jabari Parker. The Cavs have a coaching vacancy to fill first—an opening that became a helluva lot more attractive now that they’re armed with the No. 1 pick.

Donovan was fairly straightforward in his response. He’s happy at Florida, heading the program he has helped turn into a powerhouse. Still, the Cavs would be remiss if they didn’t at least try. Though interest has cooled over the years—or so it seems–Donovan has been one of the more sought-after college coaching candidates.

Back in 2007, he even had an agreement in principle to join the then-Dwight Howard-led Orlando Magic, before he inevitably backed out, preferring to stay at Florida. The interesting part about the whole thing, per ESPN.com, was he agreed to a non-compete clause, which precluded him from coaching in the NBA for five years after that, so he wasn’t really eligible for any positions until summer 2012.

Seven years later, perhaps he’s ready to give the NBA a shot again. Or maybe he’s done with the Association for good. Or maybe this was just an obligatory feeler a suddenly confident Cavs team put out. The latter is more likely, considering how much brighter Cleveland’s future looks now, compared to two days ago.

Windhorst says the team has also contacted Lionel Hollins, Alvin Gentry and George Karl. Bet on them going after even more candidates as well—big-name candidates. They have a huge draw in that No. 1 pick, and that’s in addition to Kyrie Irving and the cap space they’re projected to have these next two summers, also known has “The LeBron James Fund.”

Might Donovan, who just finished his 18th season at Florida, be willing to take his coaching talents to Cleveland? Doesn’t sound like it. Luckily for the Cavs, they don’t have to care. Fortuitous pingpong ball bounces have given them other, just as prominent options.