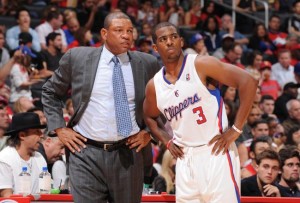 One thing we’ve never really associated with Chris Paul was the notion that he’s a ball-hog. He’s a consistent double-digit assist/game guy and one of the few true PGs in the game. But if you ask Doc Rivers, Chris could stand to share the rock a bit more.

Doc feels that the Clippers offense is better if more guys touch it more. Thinking back to Doc’s days in Boston, if feels like Rondo was more ball dominant that Paul. Interesting

“Players want to find out if you know what you’re talking about when it pertains to them, to the way they do things,” Rivers says. “Every one of them will tell you they want to win, but I don’t think everybody in the league means that. I think they mean it as long as they can keep doing whatever it is they want to do. Winning requires sacrifice.”

“I think Chris realized last year in the playoffs, holding the ball, getting double-teamed, getting down to late shot clocks every time, you’re not going to win that way,” Rivers says. “Movement, quick decisions, pulling it and swinging it and trusting the pass — that makes Chris impossible to guard. And I think he realizes it now.”

When Paul was sidelined with a shoulder injury for 18 games in January and February, Rivers urged him to consider giving up the ball even earlier, while still in the backcourt. Paul smiles thinking about the term Rivers used: the hockey assist. “Sometimes it’s about the pass that leads to the pass,” says Paul, a seven-time All-Star who was averaging 18.8 points and 10.9 assists through March 25. “It’s been fun, passing the ball ahead to Blake (Griffin), letting him push it and make plays. It’s not always about the assist.”