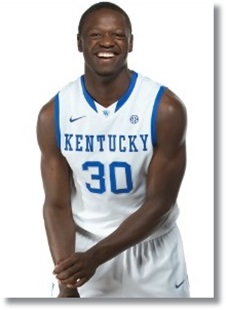 Don’t look now, but University of Kansas freshman Andrew Wiggins may have some stiff competition, when it comes to the #1 overall pick in the 2014 NBA Draft.

It’s super early, but Kentucky freshman Julius Randle, who has been favorably compared to Lebron James, looked every bit the player that numerous NBA teams are already in “Tank Mode” for, as he piled up 23 points and 15 rebounds in only 26 minutes in an opening night win over UNC-Asheville.

I know, it’s UNC-Asheville, let’s see what he does against Tennessee or Florida’s larger frontline once SEC play begins.  I get it, but everything now points to Randle, potentially being the most ready instant impact player come draft day next June.

To put the numbers in perspective, per 35 minutes, Randle would have entered the collegiate record books by becoming one of the very few players to ever register a monstrous 30 point, 21 rebound performance in his NCAA debut.