Omer Asik Requests Trade From Rockets After Being Benched

admin November 15, 2013 Blogs No Comments on Omer Asik Requests Trade From Rockets After Being Benched 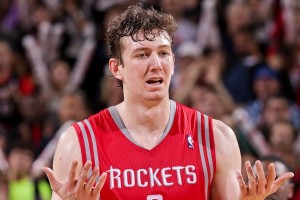 This was never going to work.

When the Houston Rockets signed Dwight Howard, Omer Asik’s days as a starter were numbered. More likely, his days in Houston were numbered. Despite what coach Kevin McHale repeatedly indicated, Asik and Howard could not share the floor together. Doing so would dictate that Howard play power forward. Or, as some us already knew, dictated the Rockets embrace disaster.

Early on, that’s just what they did. They started one of the best center’s in the game at power forward and spent the first part of their season battling to stay above .500. Recognizing that the duo just wasn’t panning out, McHale benched Asik. In light of his demotion, Asik has no requested a trade from the Rockets, according to the Houston Chronicle‘s Jonathan Feigen:

With his starting job gone and playing time slashed, Rockets center Omer Asik asked to be traded, two individuals with knowledge of the request said Thursday.

Asik, who started every game after signing with the Rockets last season, came off the bench Wednesday in Philadelphia but struggled, playing four minutes and not at all in the second half. He didn’t play in Thursday night’s 109-106 win over the Knicks.

Asik declined comment, referring questions to his agent, Andy Miller, who also would not comment on the request.

“I would say the situation is very frustrating right now, and we’re trying to work through it,” Miller said. “For Omer, the objective has always been to continue to develop and grow as a player. That’s why we came to Houston in the first place. If that objective can’t be met, if we can’t get the right platform to grow and contribute as a player, it’s certainly frustrating.”

No surprises here. Asik had requested a trade previously, immediately following Howard’s arrival in July. But he was denied. This time, per ESPN’s Brian Windhorst, he was denied again:

With his starting spot gone and playing time slashed, Houston Rockets center Omer Asik again has asked for a trade, although the team has informed him it currently does not intend to deal him, sources told ESPN.com.

The issue was revived this week when Rockets coach Kevin McHale decided to take Asik out of the starting lineup after an experiment of playing him and Dwight Howard together yielded only mixed results.

Houston’s apparent refusal to trade Asik is slightly puzzling. Clearly, they’re better off spacing the floor. Clearly, Howard is better off at center. Clearly, trading Asik would make it easier on James Harden and Jeremy Lin, and even Chandler Parsons, when they begin their forays into the paint.

Only, not yet. Rockets general manager Daryl Morey isn’t one to rush things, and I would imagine he doesn’t want to seem desperate, as he’ll hope to capitalize off Asik’s trade value. Though finding a home for a seven-footer who notched a double-double last season shouldn’t be an issue, receiving the quintessential floor spacer they need in return will be.

The possibility remains that Asik goes nowhere and that the Rockets continue to switch up their starting five depending on the opponents. Teams like the New York Knicks and Philadelphia 76ers run small, so against those types of lineups, Asik would be benched. Against other opponents, he would have the opportunity to start. Houston could very well stick with that current system.

There’s already too much smoke for their not to be a fire, though. I sincerely doubt the big man finishes the season with the Rockets.

At the first sign of a diminished role, Asik became unhappy. Think an inconsistent starting lineup spot is going to sit well with him? Think again.