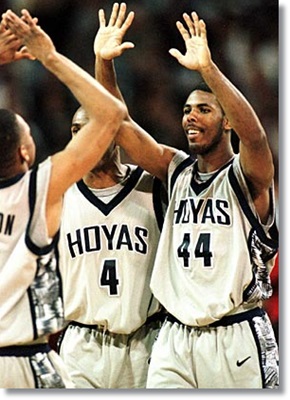 It’s been a long time since we heard the name Victor Page.  We are going back a bit, but it was he, and not Allen Iverson that was the MVP of the 1996 Big East Tournament.

And when Iverson took his talents to the NBA the following season, it was Page that was the stand-out guard for Georgetown, leading the conference in scoring in 1997.

Page overcame a lot early on in life, including losing his father to a drug overdose and his mother to AIDS, before coach John Thompson literally saved his life from a similar fate, turning him into a scoring machine at Georgetown.

But the Washington D.C. native never realized his dreams of becoming an NBA star since after going undrafted following his breakout ’97 campaign, Page got selected in the CBA Draft, and became one of the best players ever for the Sioux Falls Skyforce, until 2001.  That’s when his life really took a downward spiral.

If being shot and losing his right eye in a neighborhood scuffle back in 2003 wasn’t bad enough, he has reportedly been charged in 33 crimes over the past 3 years and has spent more than 700 days behind bars, being charged with everything from unlawful entry, assault, and possession of a controlled substance.

But his most heinous crime has to be what he did recently to a longtime girlfriend in Forestville, Maryland……

“The suspect(Page) jumped out of bed, pulled the victim’s hair tearing it from the scalp,” the statement of probable cause read. “He then dragged her to the bathroom, throwing her into the tub and running hot water on her while punching the victim repeatedly in the face.”

“The suspect then ran into the kitchen and grabbed a knife and stabbed the victim on her right hand and right thigh. The victim then ran outside as the suspect chased her with the knife and stated he was going to kill her.”

Court records show the same woman is the complainant in at least three previous cases against Page since 2009.  He was charged with 2nd degree assault and was given a 10 year prison term.

It’s a said and cautionary tale that should hit home for a number of today’s youth, as not everyone makes it to the NBA, regardless of how talented one thinks they are……….