admin September 3, 2013 Offbeat No Comments on Lebron James to be Executive Producer of New Sitcom on Starz Channel 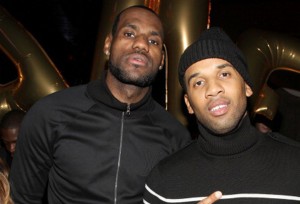 One of the more amazing things about Lebron James’ history and ‘story’, so to speak, is growing up in front of a camera. From a very early age, Lebron James was tagged as ‘The Chosen One’, the second coming of the GOAT. And in large part he has yet to fail to live up to the hype. Probably the only time in his life in the spotlight that Lebron has failed to impress was his arrangement with ESPN to air his free agency decision live, in which he broke the hearts of every basketball fan in Ohio. So given his life experiences growing up in the inner city, raised by a single mother, and rising up to amass an enormous fortune, it is only fitting that Lebron James has decided to executive produce a new television sitcom on the Starz channel about the lives of two men from the streets of Philadelphia who attain fame — one is an NBA star and one is not — and how they deal with friends and families in the wake of all of their success. The show is likely going to be called ‘Survivor’s Remorse’.

“I think the main thing for me is, first of all, making it out of a place where you’re not supposed to. You’re supposed to be a statistic and end up like the rest of the people in the inner city — (and) being one of the few to make it out and everyone looking at you to be the savior,” the Miami Heat superstar said in a phone interview last week.

“When you make it out, everyone expects for — they automatically think that they made it out and it’s very tough for a young, African-American 18-year-old kid to now hold the responsibility of a whole city, of a whole community. I can relate to that as well,” said James, who was 18 when he came to the NBA and is now a 28-year-old veteran. (via AP)

Lebron is working with his longtime friend and business partner Maverick Carter on the show’s development. Carter swear’s the show is not directly based on his and Lebron’s lives in any way:

“It’s definitely not an autobiographical series about my life or LeBron’s life; it’s fictional characters living in a fictional world,” said Carter, before adding with a laugh: “LeBron is actually too famous, he would screw the show up if I tried to make a show about him.”

But Carter and Lebron aren’t simply relying on a great story to captivate audiences, they have enlisted the help of Tom Werner on the project. Werner is the producer behind huge sitcom successes, such as ‘Cosby Show’ and ‘Roseanne’.