admin July 18, 2013 Blogs 2 Comments on Paul George Says It Would Be ‘Tough’ To Turn Down Kobe Bryant 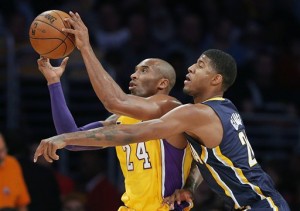 The Indiana Pacers superstar is slated to become a restricted free agent next summer, when the Los Angeles Lakers will have a ton of cap space. See where I’m going with this?

Players like George don’t often make it to restricted free agency. Their teams offer them extensions—max extensions. And that’s just what the Pacers will inevitably do. He won’t make it to the semi-open market next summer.

But what if he did?

Well, then it would be tough for him to turn down Kobe Bryant, one of his idols, and the Lakers.

“Of course it would be tough (to say no to Kobe),” George said on “The Herd with Colin Cowherd” on ESPN Radio (via Scott Agness of Pacers.com) You’re talking about playing [at] home.”

That sound you hear is the pining of every Lakers fan in the world driveling at the thought of pairing Kobe with George. Those two, together, would make quite the duo. Forget LeBron James and Carmelo Anthony (well that may be going a bit far), George would be coming home if he signed in Los Angeles.

Only he’s not going to sign in Los Angeles. He’s happy where he is.

And he’s going to stay a Pacer.

Indiana isn’t about to let him out of its sights. Not after what he did this season, leading the Pacers to the Eastern Conference Finals, bringing them within one victory of the NBA Finals.

All without Danny Granger.

The 23-year-old is headed for great things. He’s not some conflicted youth, prone to lashing out and playing exceptionally poorly. In other words, he’s not Brandon Jennings. He’s worth the money the Pacers would have to pay him, the money they should pay him.

Cornerstones who can do it all—defend, score, dish, etc.—don’t come around often. Almost never. George is one of the closest things to a LeBron protege the NBA has, because he can do so much. You don’t let someone like that slip through your fingers, even if you have the right to match any offer next summer.

Say the Pacers opt to let him set his own market a year from now. What if he pulls an Eric Gordon, Brandon Jennings or Jeff Teague, and claims he wants to leave? The Pacers can still match whatever bid is placed, but they’ll do so knowing the relationship is damaged, that it’s impure.

Potentially saving a few bucks is not worth the risk. Not of losing, or even upsetting George, who’s the championship foundation the Pacers have spent what feels like forever searching for. And most certainly not when there are other teams waiting, watching and even hoping they can make a run at George.

Because there will be teams waiting, hoping. One of those teams may even be the Lakers, who have something the Pacers don’t—Kobe Bryant.

Would that ultimately matter? The Pacers shouldn’t wait to find out.