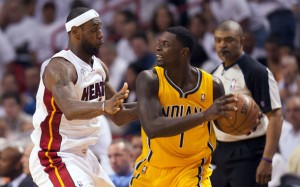 During game 4, LeBron and David West both flopped during the same play, but he whistle was not blown. Lance Stephenson also flopped, but the refs didn’t fall for that either. This either shows growth among NBA refs with regard to flopping, or these guys just aren’t good actors. It will cost each of them $5K.

Miami’s LeBron James and Indiana’s David West and Lance Stephenson were all fined $5,000 by the NBA on Thursday for violating the league’s anti-flopping policy.

James and West were penalized for the same play during a messy Game 4 of the Eastern Conference finals. James spun and fell and West tumbled toward the baseline during what looked like a poorly choreographed dance routine as the NBA’s MVP defended the Indiana forward.

Stephenson was fined for exaggerating the contact after a slight elbow from Ray Allen following his basket, staggering back toward the sideline after making a short jumper.