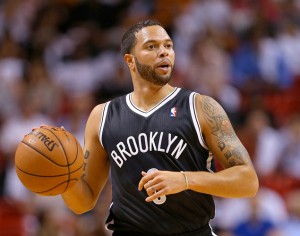 When Deron Williams decided to remain with the team, the Brooklyn Nets had their player of the future to build around. While Deron is performing well, his numbers are down slightly from his Utah days. Deron has a reason for that:

Since coming to the Northeast, he has eroded in nearly every facet of his game. His scoring has declined, and his shooting percentages have plummeted. […] Injuries may be partly to blame. But as the Nets prepared to host the Jazz on Tuesday, Williams listed another factor: the playbook. “That system was a great system for my style of play,” Williams said of the “flex” offense run by Utah Coach Jerry Sloan. “I’m a system player. I love Coach Sloan’s system. I loved the offense there.”