Sometimes in movies, a particular scene or theme is given the highlight on screen breaking with the normal shot of the actor to showcase something else for a brief period. While other similar lists just name certain sneakers that were worn by actors in movies, our list focuses on strictly basketball sneakers that made noteworthy appearances during the filming.

Scroll down to check our list of the Top 10 Basketball Sneaker Moments in Movies. 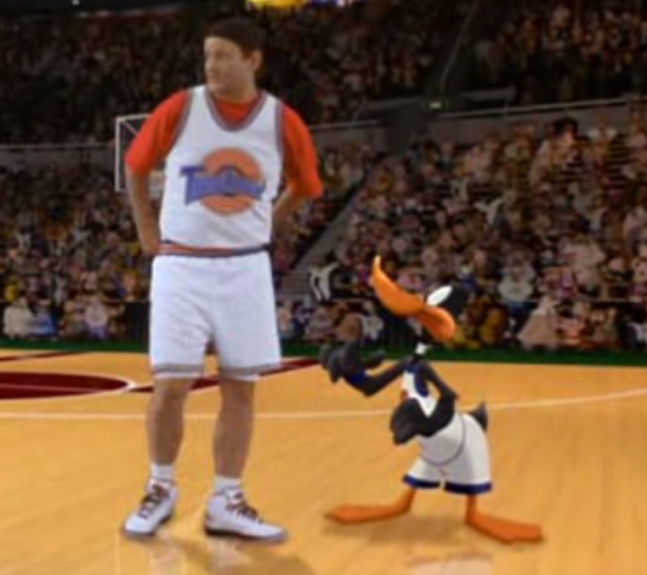 After having his new publicist Stan be flattened by the competition (literally) and with 10 seconds left and down by a single point, with no more available players to fill the fifth slot, the Tune Squad’s chances for victory didn’t look very good in Space Jam. Like a knight in shining armor, Bill Murray appears out of no where and ready to play. What’s more impressive than his timing and no-look pass to a cutting Jordan, is the pair of ‘Chicago’ Jordan IIs that he had laced up. Keep in mind that shoe had been released 9 years prior and hadn’t yet been given the retro treatment, leading me to wonder what other kicks he has in his stash. 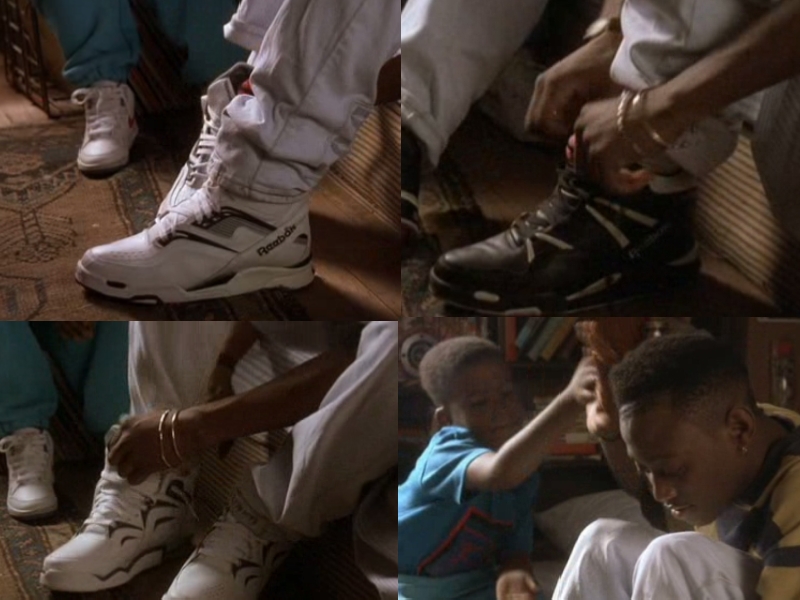 Getting dressed for school in the morning is something youth all over the country do and those fortunate enough to have multiple footwear options could tell you just how hard the decision can be. With the aid of his little brother, Q goes from the Twilight Zone, Court Victory, and the Omni Zone pumps from Reebok before finally settling on an unidentifiable Nike boot. 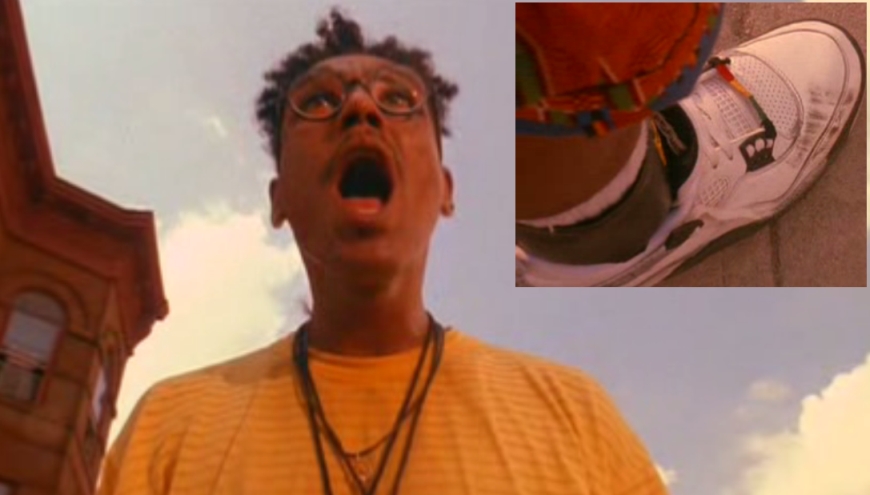 If you think only rainy days can be sad, you’ve never seen Spike Lee’s Do The Right Thing. After receiving a week-long ban from Sal’s Pizzeria during the middle of the summer, Buggin Out day takes a turn for the worst when his $100 ($108 with tax) brand new White Cement Jordan IVs get scuffed by a man walking his bike to his building. Any sneakerhead will tell you the rage that overcomes you when a pair of your kicks are smudged without even an apology. The heat might’ve helped Buggin Out stay true to his name but cooler heads prevailed as not even a single punch was thrown during the encounter. 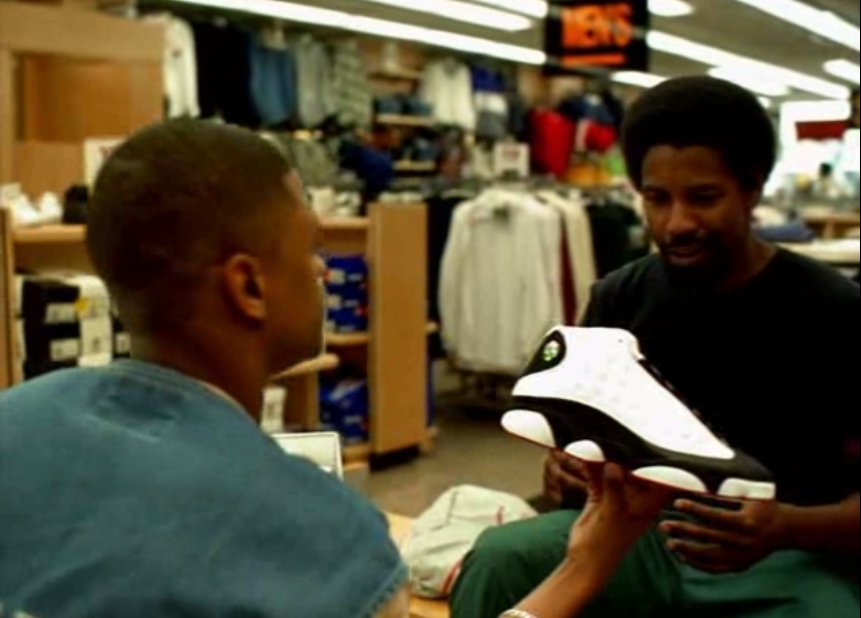 While temporarily released from prison on a mission to recruit his son Jesus to Big State University to play basketball. Jake Shuttlesworth takes the limited amount of money he is given to get something he hasn’t been able to get for a few years; a new pair of sneakers. When in the sneaker store he asks for the newest Jordan which at the time was the ‘Chicago’ Air Jordan XIII.

#4. George of the Jungle 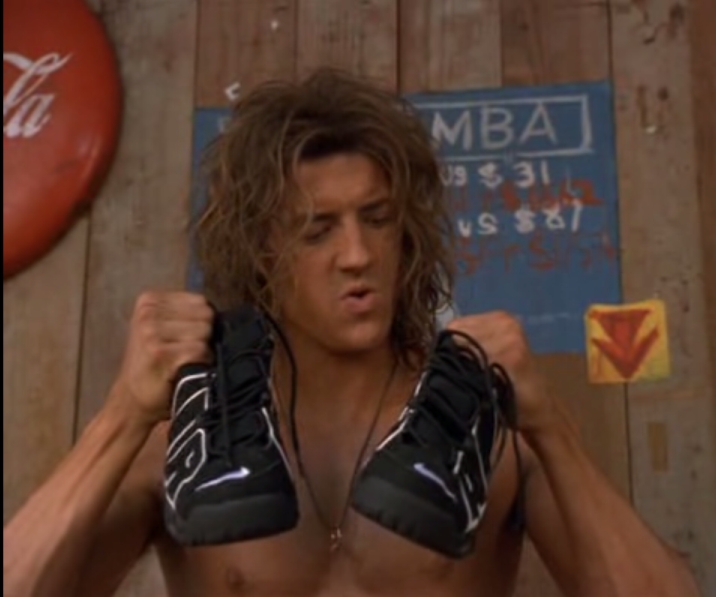 Who knew Eastbay shipping was takes the same amount of time it would take you to mail yourself to the jungle. George of the Jungle tells the story of a man named George who’s been living amongst the animals in the jungles of Africa his whole life. After meeting a woman who takes him back to the city with her George discovers that his favorite monkey has been captured and returns to save him. When George ships himself back to Africa he finds his order of a pair of Nike Uptempos to aid in his running through the jungle floor and eventually stops the poachers from taking the primape captive. 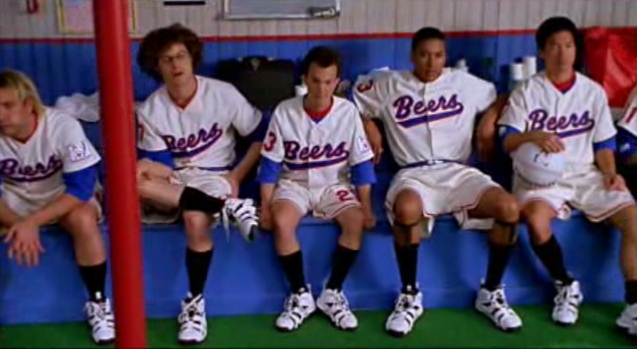 A problem that many sports fan have with these days mostly has to deal with the manners are run. From the constant talk of player salary to rapidness of teams being moved, BASEketball does a great job poking fun at the heavier issues in sports and showing a light on a subject mostly left in the dark. The Beers team shoe was the adidas KB8, now known as the Crazy 8. The South Park creators must have really wanted to get that uniform policy right because the Beers not only had the White-Black Crazy 8s as their home sneakers, but Black-White pair as the road sneakers. 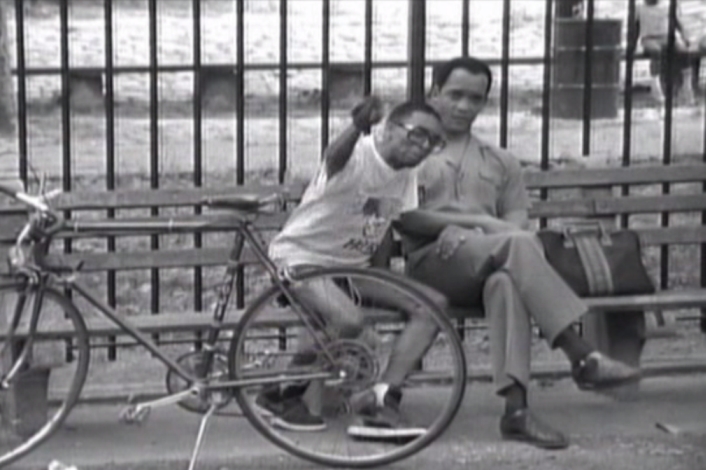 She’s Gotta Have It was Spike Lee’s first major motion picture chronicaling Nola Darling’s sexual revolution. After a pretty steamy foreplay scene, the camera pans down to show Nola sliding her foot into the Air Jordan I worn by Jordan spokesperson Mars Blackmon. When it came time for the actual sex scene in true sneakerhead style Mars did it with his sneakers on. Note that even though the entire movie was depicted in black & white and many thought Mars was wearing the Bred Is, promo videos for the film were in color and showed Spike Lee wearing the Royal Blue Is which leaves us to wonder what colorway he was actually wearing in the movie. 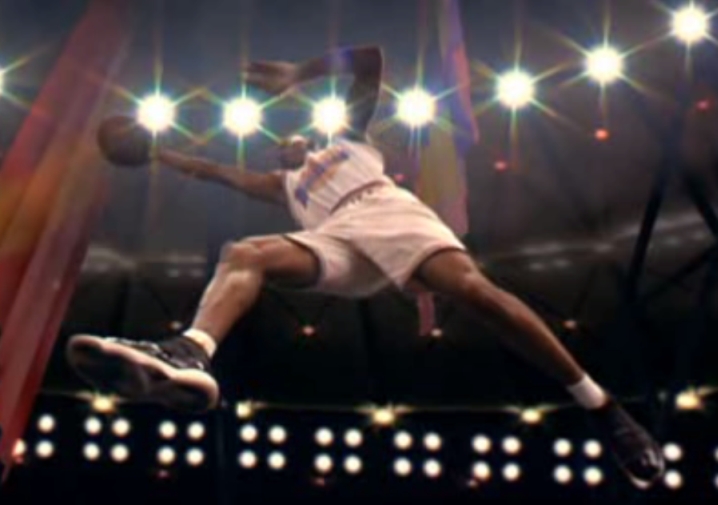 While Michael Jordan spent time away from the league to go play minor league baseball for the Chicago Barons, he found other ways to make money and a result of that is the movie Space Jam. In the final scene where Mike is set to jump at tipoff against the Monstars in a basketball game which decides the fate of the Looney Tunes on Earth, the Shawn Bradley-esque alien looks down upon Jordan’s feet and exclaims “cool shoes”. This was the first time the world got to lay eyes on the now grail-status colorway of the Air Jordan XI.

Agree? Disagree? Let me know what you thought of the list or feel as if I left something off.

Rumor: No one on Raptors is ‘Off Limits’ as Toronto Tries to Trade for Top-10 Draft Pick