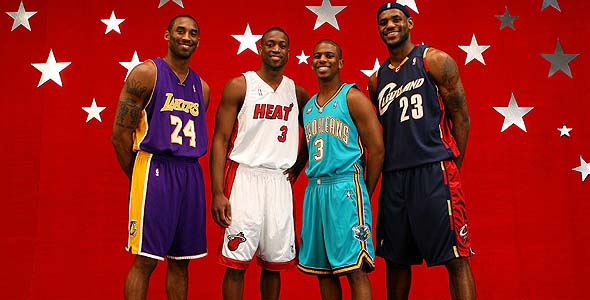 2. LeBron James – Does it all, but Paul does the rare categories.

3. Dwyane Wade – Great year last season and should do it again this season.

5. Danny Granger – Should improve all across the board.

6. Kobe Bryant – Numbers should decline across the board.

9. Kevin Durant – Numbers will go up across the board and might hit 30 ppg.

12. Brandon Roy – Numbers should increase across the board.

17. Caron Butler – Does it all and although Agent Zero is returning everything but ppg should be the same.

19. Andre Iguodala – Slightly down last season but numbers should increase.

21. Antawn Jamison – Should still have high scoring and rpg.

22. David West – Consecutive All Star appearances and should make it again.

27. Josh Smith – Bad year last season but numbers should improve across the board.

30. Carmelo Anthony – Mini Dirk but too many TOs. His numbers should increase.

35. Carlos Boozer – Should return to his double double days and get traded.

42. Andrew Bynum – All stats will improve.

49. Nene – Not the ATL Housewife and will have similar numbers as last.

56. Al Horford – Should turn into a double double machine. Decent bpg and apg.

57. Jason Kidd – His assists should increase but rpg and ppg should decrease.

59. O.J. Mayo – Good all around game that will improve every season.

63. Andre Miller – PPG will dip but apg may increase.

69. Charlie Villanueva – Should see an increase in ppg and apg.

72. Kevin Love – Rookie season will be only season he does not average a double double.

73. Marvin Williams – Should break out next season. Health remains a concern.

74. Trevor Ariza – Everyone’s favorite role player takes on a harder role and that is as a scorer.