admin April 4, 2009 Blogs 2 Comments on Tim Duncan is to Bill Russell, as Bill Russell was to Jackie Robinson 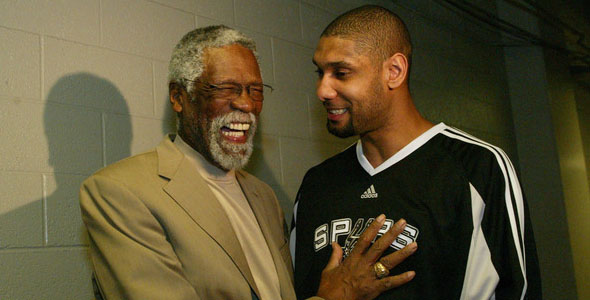 Aside from being one of the greatest NBA basketball players of all time (certainly the most accomplished with 11 championship rings), Bill Russell the retired Boston Celtic is one of the most powerful, influential, and emotional speakers around. The man just has a ‘way’ about him that tugs on your heart strings. Every time Russell is featured in an interview, i’m not only drawn to the screen but more so glued to it.

However, starting last year with a series of dramatic pieces he did with Kevin Garnett of the Championship Celtics, Bill Russell has been on the other side of the interview as the interviewer instead of the interviewee. It looks like this season his feature interview heading into the playoffs will be with Tim Duncan of the San Antonio Spurs. Based on this video preview of the interview, I would have to say that this one should be every bit as powerful and dramatic as last year’s Garnett-Russell piece. Look for the full feature to air on Sunday, April 5th, 2009:

(H/T for the video to Hardwood Houdini, via NESW Sports)