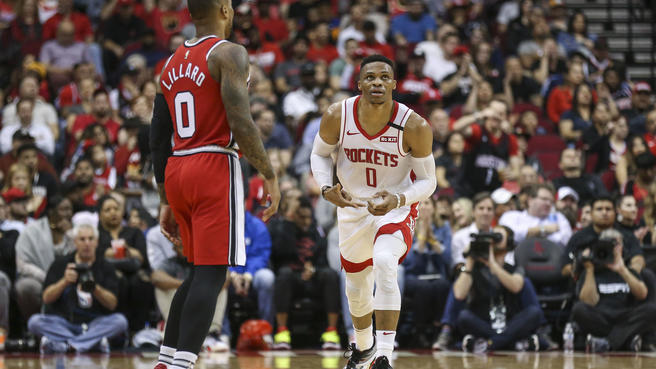 The talk about the best player between Damian Lillard and Russell Westbrook may not end soon. The conflict between them has only been a thing for the last two seasons. Yet, it is now almost impossible to hear one name without the other.

When it all Started

This rivalry goes back to when Westbrook played for the Oklahoma City Thunder. Even so, the beef further heightened during the kick off of the 2019 season. People were looking to prove who is the better player between the two. We all know that Lillard is quite a long-range shooter. He made a 3-pointer shot from half-court that sent Westbrook home early. Many people use this particular series to prove why Lillard is better than Westbrook. This opinion ignores all the actions we have seen from both players.

How the Beef Progressed

Last summer, Lillard said that there was no beef between them but rather a fun rivalry. The 29-year-old Blazers guard has taken the game to a new level, leaving Westbrook in the rear seat. With Portland Trail Blazers being at No. 10 with a record of 20-27, Lillard is keen to beat the Houston Rockets. For the first time since the 2012-13 season, the team risks missing the playoffs.

Lillard recounts to Jason Quick how Westbrook once taunted him. He says Westbrook asked him where the Blazers seeded in the playoff. During the game, with the Rockets were down by 14, Lillard fouled Westbrook in the post. The Rockets guard is on record saying that a foul is a bucket, and that Lillard cannot guard him. The taunting goes on with Westbrook considering this as getting automatic two points. Lillard retaliated by telling him that he was only a 60% free-throw shooter. Lillard added that Westbrook was going to lose both chances.

When Westbrook missed the first shot, Lillard rubbed the salt in by telling him “50 percent now”. That is when Westbrook hit him with “what playoff seed are you all?” Lillard closed the clash by telling Westbrook that he is the last person Russ wants to see in the playoffs. With these remarks, Lillard was referring to how he sent Westbrook home in his days with Thunder. After all insults, Blazers had the last laugh when they won 117-107 against the Rockets.

In the 2019 season, Westbrook said that he has been busting Lillard’s chops for years. But we have only been seeing Blazers guard doing the busting. In every incident, Westbrook is always the aggressor, and the Jan 15 game was no different. Some of the aggressive traits include ball kicking and shoving Lillard during games.

Yes, Westbrook is an excellent player and can become a Hall of Famer. But he has been unable to support his talk with impressive results. Also, Westbrook has gone home in the first round of the season for the past three years. While Lillard may not talk big, he delivers gold each time. An aspect that makes fans consider him the best between the two. Who do you think is the best player between the two rivals? Base your answer in areas like scoring, shooting, passing, defense, and rebounding. Back whoever you think will bring their game through basketball in-play betting the next time they face off.

Although the players have cold war during the game, they are quite friendly outside the court. The beef between Russ and Lillard always hypes the game between Rockets vs. Blazers. It is no doubt that these two are among the best NBA players for the 2019-20 season. They play vital roles in their respective teams, with differences coming in the usage. Westbrook is no doubt a top scorer, while Lillard is a better shooter.