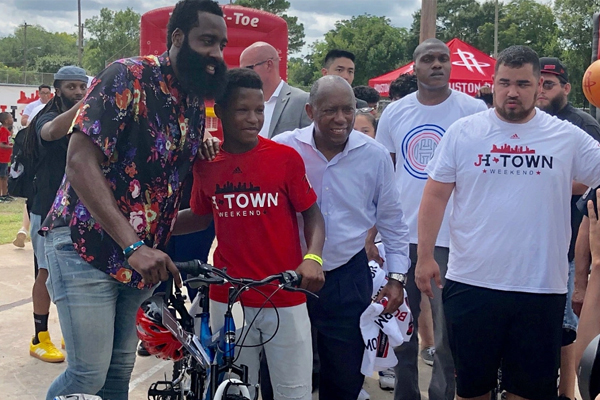 James Harden has donated more than $240,000 to the city of Houston to renovate outdoor basketball courts in under-served areas that were ravaged by Hurricane Harvey.

At an event Saturday to mark the donation, Harden said he wants to become a legend off the court and hopes the renovations will convince kids in the area to get more active.

James Harden explains his $240,000+ donation (via @_3thehardenway foundation) to the City of Houston to renovate basketball courts in underserved communities. #Rockets pic.twitter.com/GVIWrqOkje

“My ultimate goal is to change Houston and make it better,” Harden said. “Obviously the hurricane affected this area greatly so this was one of the reasons why I wanted to bring some positive energy and some light on this community.

“It’s baby steps but we’re going to get there. In a few years, we’re gonna change the city around and make it legendary.”

Harden shared that when he grew up in Los Angeles, playing basketball in outside parks was a big part of his upbringing and helped him make friends which is why he believes children would benefit from those types of experiences today.

“Nowadays, everything is so social media-based, kids aren’t outside playing anymore,” Harden said. “They’re on their phone or playing video games. No, (they) need to be active and have fun and be kids. Courts is just the beginning. My ultimate goal is to change Houston and make it better.”

“Obviously the hurricane affected this area greatly, and so this is one of the reasons why I wanted to bring some positive energy and some light on this community,” Harden continued. “It’s baby steps, but we’re going to get there. In a few years, we’re going to change this city around and make it legendary.”

Hurricane Harvey was a Category 4 hurricane that formed in the Atlantic Ocean in August 2017 and unleashed devastation across Latin America, the Caribbean, and the Southern United States. Within the U.S., Texas and Louisiana were hit particularly hard, with many areas of Houston’s metropolitan area subjected to severe flooding.