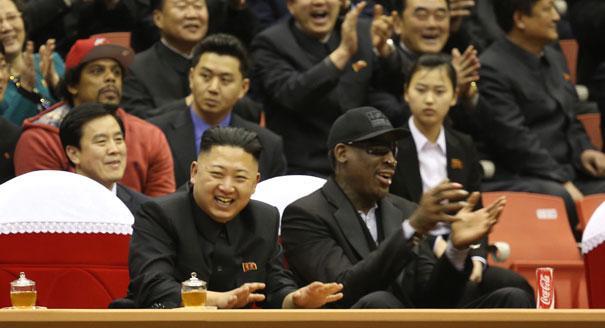 5. Charles Barkley threw a man through a window

It’s 1997, Charles Barkley is tearing it up at the Houston Rockets, but the next thing that happens sees him in court facing criminal charges. Why? Well, for throwing a man through a bar window.

Charles was enjoying some quiet drinks with friends when suddenly a drink was thrown over him. The altercation that followed saw 6 foot 6 inch Barkley forcibly pick the man involved up, before throwing him through a plate glass window like a lawn dart. When taken to trial, Barkley allegedly told the judge that his only regret was that the pair were only on the first floor.

The ‘hermit nation’ of North Korea rarely lets visitors from the West and especially America into the country, never mind anywhere near the eternal ruling family headed by King Jong Un. So it’s pretty insane that flamboyant power forward Dennis Rodman of all people became a friend of Jong Un after visiting the nation with a Vice filmmaker. Fast forward to 2018 and Rodman is pushing for credit for the early release of an American prisoner, as well as talks between North Korea and the US.

If there’s one nation in the world you’d expect to dominate international basketball, it’s the USA. So imagine the shock when the world’s most dominant team was lost the gold medal to the underdogs in 1972.

At the height of the Cold War, almost every sporting event between the USA and the Soviet Union’s teams was a thriller, and often pretty close. In basketball, however, a USA team which included some NBA all-stars succumbed to a 51-50 loss in the final against a Soviet team aided in a few ways by the referee, namely three questionable penalties. The loss was so unexpected and the controversy so strong that team USA refused their silver medals in protest.

Christian Laettner may also be remembered for being the ‘most hated player in college basketball history’ for multiple reasons, including stamping on the chest of Kentucky player Aminu Timberlake, but it’s his incredible buzzer-beater that put the 6 foot 11 inch Duke University graduate and Olympic gold medallist into the history books. In a tight game that saw Laettner pick up a perfect ten field goals and 10 free throws, the game went to overtime.

In the dying seconds, Kentucky scored to lead 103-102, leaving 2.1 seconds on the clock. Duke called a time out, set up the play, then an incredible 79-foot pass landed in the hands of Laettner. He scooped, turned and put the ball in the air as the time expired. One swish later and the score was 104-103 in favour of Duke, with the moment and game itself forever entered into the ‘greatest of all time’ section in the basketball history books.

In 1993, following a rough period that involved gambling addiction, the loss of his father and a lack of love for basketball, Jordan made the shock announcement that he was retiring. He went on to play Minor League Baseball for the Chicago White Sox, then the Birmingham Barons, a decision based on his late father’s desire to see his son play baseball.

Jordan’s number was retired and he even had a statue erected outside United Centre in his honour, but that wasn’t enough to stop him from making a sensational return to the NBA in 1995. That in itself would be an incredible story, but Jordan went on to do it again. After leaving the Bulls for the second time in 1999, Jordan went into management, taking control of basketball operations at the Washington Wizards. The draw was again too strong however and despite saying he was ‘99.9% certain’ he would never play again, he lined up for the Wizards between 2001 and 2003. Michael Jordan hasn’t played NBA basketball since – but they say third time’s the charm