Dwyane Wade Could Return This Season for Bulls

Anou Enright April 6, 2017 Ryan Bawek No Comments on Dwyane Wade Could Return This Season for Bulls 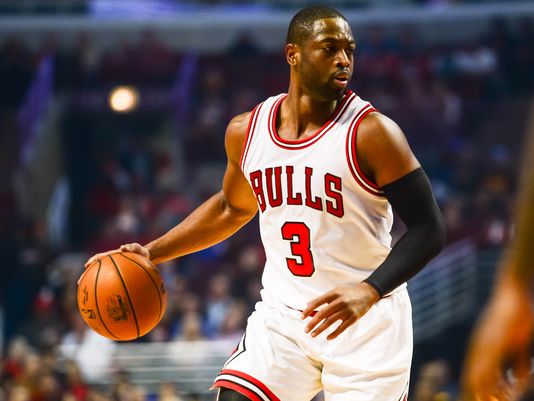 A playoff picture that once was starting to look pretty bleak for the Chicago Bulls is now looking more and more like a realistic possibility or even likelihood.

The Bulls were sitting on the outside looking in on the playoff picture three weeks ago when their veteran leader and second best player, Dwyane Wade was announced to be sidelined for the season with elbow surgery.

Fast forward to April 5, and the Bulls have won six of their last 10 and are in the No. 7 seed of the eastern conference. Now it appears their leader could be back before the end of the season as well, as soon as Saturday vs. the Brooklyn Nets.

Dwyane Wade could return to the court as early as Saturday; was expected to miss rest of season with fractured elbow (via @NickFriedell) pic.twitter.com/9l39tTC0Df

Here is what Vincent Goodwin of CSN Chicago said he broke the report on Wednesday:

“Dwyane Wade was in full lather after the morning shootaround at Madison Square Garden, as optimism increases that he’ll be back for the Bulls this season after suffering a right elbow injury a couple weeks ago.

Bulls coach Fred Hoiberg declined to say whether he feels Wade will be back before the end of the regular season and Wade declined comment altogether, but with the increased intensity of Wade’s workouts it suggests there’s a light at the end of the tunnel — be it a probable playoff showing or sometime sooner.

“It’s a day by day thing with Dwyane now,” Hoiberg said. “He’s feeling better but obviously there’s a lot of work to do as far as getting his strength back.”

Upon first glance getting a hall of famer like Wade back for the final playoff push and a potential 1st round series is huge, but the Bulls have been playing and shooting the ball very well in Wade’s absence with what we could assume is a result of more spacing and ball movement.

It will be interesting to see how they re-integrate Wade and whether they can make the postseason to set up a looming match-up with the Cavaliers or Celtics.