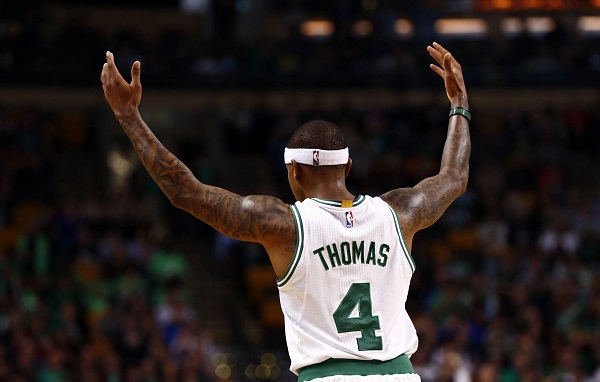 Isaiah Thomas has come a long way from being the basketball equivalent of Mr. Irrelevant. The No. 60 and final pick of the 2011 NBA Draft by the Sacramento Kings is now the star for one of the better teams in the NBA, averaging 28 points and six assists per game.

Thomas’s lightning quickness, quick trigger, unwavering confidence and uncanny ability to finish around the rim among the trees makes him one of the most deadly and entertaining players in the NBA.

He is 5’8″ in a league where the average height is over 6’6″ and yet he is by any measure one of the 15 best players in the world right now.

Always overlooked, figuratively and literally, the diminutive dynamo has made himself into an elite NBA point guard and the go to player for maybe the most historic basketball organization in the world, the Boston Celtics.

He has made 29 other general managers around the NBA look foolish, the 29 who passed on him twice in the NBA Draft (in theory). The Kings who let him walk for nothing after breaking out and averaging 20 points and six assists for them in the 2013-14 NBA season and the Phoenix Suns who panicked and dealt him for what amounted to the No. 29 pick in the 2015 NBA Draft in what is becoming one of the most lopsided trades in NBA history.

Thomas has taken his game to a whole different level thus far this season, averaging six more points per game than he has ever averaged and increasing his Player Efficency Rating to 26.8, 4.6 points higher than it has ever been.

The last player under 6 feet (even though he was listed as 6’0″) who was this much of a force on the offensive end and had an uncanny ability to score around the rim at will despite his size was Allen Iverson.

When the NBA keeps moving to more positional flexibility, where the height of a point guard is not as different as the height of a center as it once was and guys like 6’11” Giannis Antetokounmpo are playing the point guard position, seeing Thomas dominate and will his team to victory consistently is a true marvel.

Thomas has appeared in one All-Star game, last season, and has never made an All-NBA appearance (until this season one would think) so he has a ways to go to become an all-time great, mentioned in the same breath as an Allen Iverson, but he at least has the minor potential to become just the second player in the history of the NBA to make the hall of fame while being listed under 6 feet tall. The only player with that rare designation is Houston Rockets legend Calvin Murphy.

It appears as though the Celtics may be one player away from true title contention, but the idea of the most renowned basketball organization ever being led by a player of Thomas’s stature and competing for an NBA title is an incredible thought and a testament to just how unique of a talent Thomas is.

This has been one of the most entertaining and statistically impressive NBA seasons in NBA history thus far with the nightly performances of Russell Westbrook and James Harden to name a few, but don’t allow the magical season that Isaiah Thomas is having to get lost in the shuffle.

Isaiah Thomas Says He is the Best PG in the League