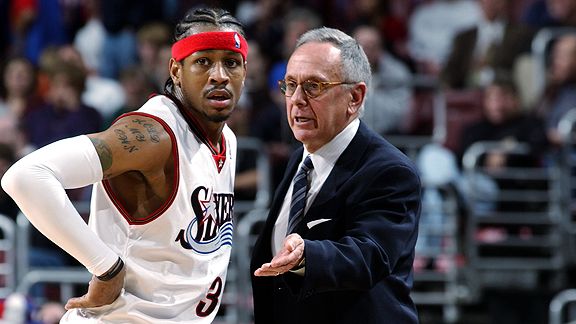 For this generation and beyond, Allen Iverson will be the face of the Philadelphia 76ers; more so than any current player. A few months ago, Iverson expressed interest in being a part of the Sixers organization. He’d like to be involved in personnel around draft time.

Iverson isn’t the only one who wants this. His former Sixers coach Larry Brown is lobbying for the same thing. Who knows what will happen but from the outside looking in, it seems unlikely.

“I just wish there was some way that he could be involved,” Brown said. “Just teach him about the organization and let him figure it out, figure out how he can help. He can certainly judge talent. He certainly has people’s respect. Kids will listen to anything he said. He’s certainly bright as hell. […] Just teach him how to be involved with the NBA, whatever level you want, but I think ultimately I’d like to see him get into management. I think he’d be a huge asset.”