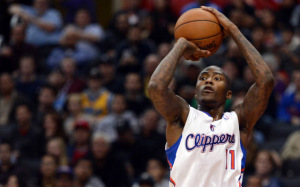 Jamal Crawford sustained a calf injury on March 2, leaving the Los Angeles Clippers without their most important reserve for the 17 games.

According to Dan Woike of the Orange County Register, however, Crawford’s extended absence is likely to end tonight when the Clippers take on the Los Angeles Lakers.

All signs pointing to Jamal Crawford returning tonight against the Lakers. He's been out since March 4 with a deep calf bruise.

Crawford’s return comes at a perfect time, considering the 2014-15 regular season concludes next week. The Clippers have four contests remaining on the schedule, which should give the shooting guard enough time to shake off the proverbial rust and ready himself for the playoffs.

But with Crawford back on the fold, Doc Rivers’ team could make some noise.

The sixth man is an integral part of the Clippers’ championship aspirations, because their bench is arguably the worst playoff-bound reserve unit. Since Crawford’s injury, the backups have posted a putrid 93.9 offensive rating—the fifth-worst mark in the league—per NBA.com.

But when the shot-happy guard is available, the Clippers have a legitimate go-to offensive weapon. The preferred reserve lineup of Austin Rivers, Crawford, Hedo Turkoglu, Spencer Hawes and Glen Davis has amassed a 102.9 clip.

Although Crawford won’t be confused as a superstar, he’s the off-the-bench piece Los Angeles unquestionably needs for the postseason.