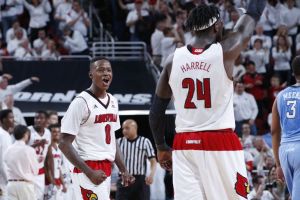 Just a couple of days after Louisville’s 76-70 loss to Michigan State, junior Montrezl Harrel and sophomore Terry Rozier reported they would be leaving the Cardinals to enter the NBA Draft.

Harrell, a preseason All-American and exceptionally talented athletic forward, had averages of 15.1 points and 9.2 rebounds this season for the Cardinals, while Rozier contributed 17.1 points a game. Rick Pitino affirmed today that both Harrell and Rozier would be leaving and feels its their time.

“They’re both leaving, yes — 100 percent,” coach Rick Pitino told reporters at a Monday news conference. “And it’s the right thing to do for both of them.”

Louisville coach Rick Pitino has announced that Montrezl Harrell and Terry Rozier are both entering the NBA Draft.