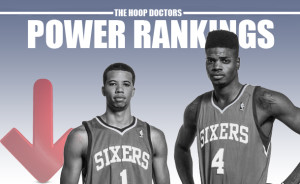 The NBA’s Eastern Conference is ugly.

This will now conclude the portion of the article where we talk about anything besides the 76ers’ suckitude.

All of that is in here. Other things, too. But allow us to pay special attention to those Sixers, who have won only one game. They are tanking. Diplomatic use of the word “allegedly” isn’t appropriate here. There is no time for it, no place for it. The Sixers are tanking, and they’re doing so terrifically. I can’t decide whether I should pat Sam Hinkie on the back for foisting such a masterful tank job or take a sledgehammer to his groin for subjecting us to such terrible basketball.

Anyhow, it’s time for the question of the week—the one on which you will harp while perusing these rankings: Will the Sixers piece together a second victory before the end of the world?