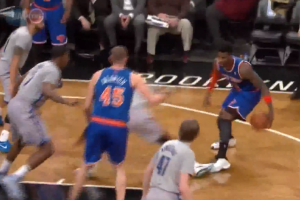 Give Paul Pierce credit for being a serviceable NBA player all these years later. He was never blessed with blinding quickness and having said that, he’s not as fast as he once was. He takes longer to recover from moves and apparently he sometimes doesn’t recover at all.

Iman Shumpert can vouch for that, who dropped Pierce last night with a rather simple, but effective crossover-stepback move. It seems like his happens frequently to Pierce, who was brought to his knees last year by now-teammate, Joe Johnson.