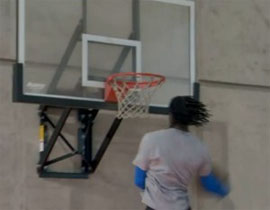 Gatorade and NFL Films have partnered for the second season of “Everything To Prove,” the online series that chronicles the journeys of 11 rookie NFL players trying to make a league where everyone must prove themselves each and every game.

The series begins this week with new episodes posting monthly throughout the season.

The game of H-O-R-S-E between Robert Griffin III and Trent Richardson took place at API Phoenix when the two players were prepping for the Combine as part of a shoot for the Gatorade and NFL Films “Everything to Prove” online series.

The first episodes of “Everything to Prove” are up and can be found at NFL.com/ETP, but our good friends over at Gatorade sent us this clip of this game of H-O-R-S-E.

Check out RG3?s windmill at the end. Not too shabby at all: