How much would you be willing to spend on a rare pair of Jordan’s? When considering this hypothetical question, how about if I upped the ante and said the shoes were modeled after a pair game worn by Jordan himself. Then let’s get a bit crazy and say the shoes are dipped in silver and are one of only 10 pairs ever made. Jordan himself owns a pair of them. How much is that worth to a rabid Michael Jordan fan, and/or shoe collector?

Well one ebay’er thinks that value is starting at $100,000 and could possibly garner more. Here is what he has to say about the kicks:

IT WAS GIVEN TO MICHAEL FROM HIS WIFE FOR HIS 32nd BIRTHDAY. HIS WIFE TOOK HIS GAME WORN ROOKIE SHOE AND 10, STERLING SHOES WERE MADE. I HAVE THE ONLY ONE THAT WILL EVER BE SOLD AGAIN TO THE PUBLIC. THE CEO FOR GATORADE OWNS ONE, MICHAEL HAS 2 OF THEM, THE JEWELER WHO HAD THE SHOE MADE OWNS ” I THINK 5 OF THEM” AND 2 OTHER UNKNOWN COLLECTORS OWN THE OTHER 2. 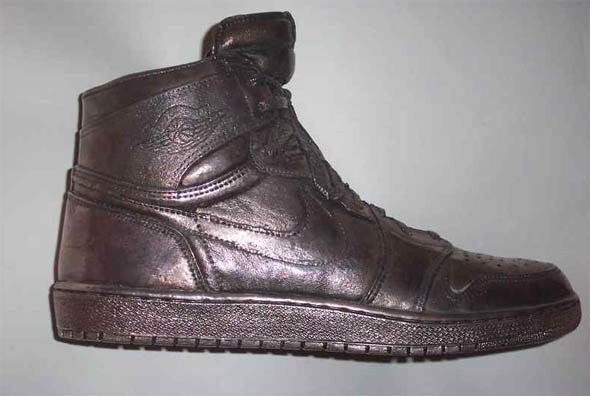