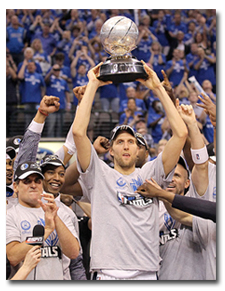 Last night, the Dallas Mavericks punched their second ticket to the NBA Finals in the last five years after defeating the Oklahoma City Thunder 100 – 96 in Game 5. They will await the winner of Chicago vs. Miami, but it looks like we’ll have a rematch of the ’06 Finals as the Heat lead the Bulls 3 – 1.

Dirk Nowitzki stood on the court wearing a baseball hat celebrating the Dallas Mavericks’ return to the NBA Finals. As his team received a silver trophy for winning the Western Conference, he looked as if he’d just been named the player of the week in November.

Nowitzki’s indifferent attitude during the pandemonium around him shows just how locked in he is right now.

“We’ve got one of those trophies already,” Nowitzki said. “This is nice for a day, but we set our goals in October to win it all. We haven’t done it yet.”

The superstar who has dominated this postseason added yet another highlight Wednesday night, hitting a straightaway 3-pointer with 1:14 left that put the Mavericks ahead for good on their way to a 100-96 victory over the Oklahoma City Thunder that ended the Western Conference finals in five games.

Read more about Dallas’ return trip to the Finals via AP on ESPN.com.