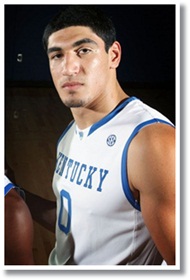 During this time of year NBA scouts are scouring over hours and hours of game footage in preparation on the upcoming 2011 NBA Draft. While most top prospects have at least one year of collegiate games to be further evaluated, finding footage potential Lottery selection Enes Kantner has been hard to find.

Mainly because he was ruled permanently ineligible by the NCAA prior to his freshman campaign at Kentucky, the Turkish phenom is a bit of a mystery heading into this year’s Draft. Even though he has practiced all season long in Coach Calipari’s pro style offense alongside his would-be Wildcat teammates, the public has not been privy to how much he has improved from high school.

All that most people have to go on is Kantner’s outstanding play in the 2010 Nike Hoop Summit, where he dominated the top HS players from the United States to the tune of 34 points, breaking Dirk Nowitzki’s longtime scoring record. While footage of that one game is spectacular, it really doesn’t do Enes much justice as to showcasing his offensive arsenal, which differs a bit from the average European player.

Enes is truly a unique talent in that he can bang down low in addition to being able to shoot an above average percentage from long range like the traditional international prospect. He has outstanding footwork in the paint despite not overwhelming athleticism, yet dunks the ball with a fierceness and frequency. In addition, the 6’10 and 260 lb gentle giant has unbelievably soft hands and a fun-loving demeanor to boot, which he made known to the world when he revealed he wants to be a professional wrestler once his basketball career is over.

Check out some recently discovered HS footage of Enes while at Stoneridge Prep: