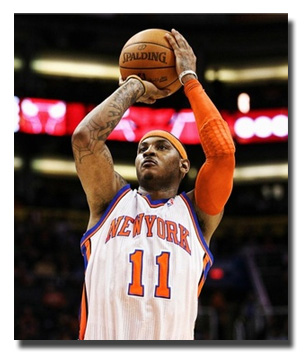 In the very first edition of Monday’s Weekly Knicks Notes, I knew that they would make the playoffs, and this shouldn’t come as a shock to many. But for it to actually happen, it has a different feel. They qualified for the postseason by stringing together three much needed wins in a row against the Magic, Nets and Cavs last week.

It was good to see them beat Orlando and New Jersey but the game I was worried about was Cleveland. The Knicks were 0 – 3 against the league worst Cavs this year for some reason and two of them came with ‘Melo. I thought that Cleveland game was going to be a litmus test as far as what they’d do in the playoffs. The Knicks beat them by 16, which puts them back at .500 at 38 – 38, and shows that they evidently got their swagger back.

The last time the Knicks were in the playoffs, they were the 8th seed and were swept out of the first round by the Eastern Conference leading Nets in 2004.  The Knicks were clearly overmatched but anytime New York is in the playoffs, it’s never a bad thing. To me, the most memorable moment from that series was when Tim Thomas called Kenyon Martin “fugazy” after Martin committed a hard and unnecessary foul on Thomas.

The Knicks have six games remaining and they shouldn’t take their collective feet off the gas. Any self respecting basketball fan knows that momentum is critical when entering post season play. Also, the Knicks are 7th right now and could finish anywhere from 6th to 8th. That would determine who they play in the first round, obviously. If they relax and finish 8th, they’ll likely play Chicago. Although the Knicks are 2 – 0 against Chicago this season, the Bulls are playing much better now then when these teams met earlier (their last meeting was Christmas day).

If they stay where they are, they’ll play Miami, who is currently the 2 seed, and if they somehow end up 6th, they’ll likely play the Celtics. Between those three teams, I like the Knicks’ chances against the Heat the best. When the Knicks acquired ‘Melo, their second game was against Miami in South Beach, and the Knicks prevailed. Additionally, I think the Heat are a mentally fragile team. Talented, but they listen to the media way too much. And I don’t think there’s any chance they could beat Boston in a 7-game series. However, the final two games of the season are against Chicago and Boston respectively. The Knicks’ performance in those two games will be telling because the Bulls and Celtics should still have something to play for by then.

There’s a few more weeks to go and it’ll be interesting to see how it all shakes out.