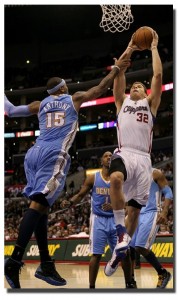 The Los Angeles Clippers took their 7-game road losing streak into Manhattan two nights ago to take on the Knicks and I had the opportunity to be in the building representing The Hoop Doctors. In listening to some of the pregame chatter from people headed into The Garden, I mainly heard a lot of “I can’t wait to see what Blake does tonight” type of talk. That’s because, if you remember, when these two teams met in L.A. back in November, Blake Griffin put on a show by dunking on anyone in sight. He would’ve dunked on his own teammates if the opportunity presented itself. The Knicks actually won that game and Amar’e had 39 and 11, but Griffin’s play and his 44 and 15 stole the attention.

So, the rematch was set and I was interested in seeing what type of game this would be, given the excitement of the previous contest. Although it was a high scoring affair, the game wasn’t nearly as exciting as the one back in November. Blake ended up with 21 and 6, but didn’t throw down any overly impressive dunks. Let me take that back. For his standards they weren’t overly impressive, but for most people, they would be attention grabbing.

In the first quarter, Blake had a dunk on a fast break, and Amar’e stumbled chasing him down court. Amar’e laid there on the ground for a minute or two before getting up. You could’ve heard a pin drop in The Garden when he was still on the ground. Everyone held their collective breath until he got back on his feet and walked to the bench under his own power.

Blake’s relatively quiet night was more than enough for the Clippers to cruise to a 118 – 106 victory because his teammates were all on their A games in one of the most balanced attacks I have ever seen. Ryan Gomes had 18, DeAndre Jordan added 17, Baron Davis (who is now incredibly slow in person. He’s still effective but Father Time and injuries sure have caught up to him) had 16, Randy Foye led the way with 24 and rookie Eric Bledsoe had some timely buckets en route to 16. And Eric Gordon didn’t even play because he’s still out with a sprained right wrist.

It was a somewhat lethargic performance by the Knicks which wasn’t helped by the fact Amar’e got into early foul trouble…again. He picked up his 4th foul early in the 3rd quarter and had to go to the bench. That’s when the Clippers were able to pull away by upping their lead to 20. That’s when the boos came. And they were loud. When Amar’e (who ended up with 23 and 5) went to the bench, their offense stalled and really showed where having a guy like Carmelo could help out. That’s probably why in the closing seconds of the game a “We want ‘Melo” chant broke out.

But even before the second half began, and when the Clippers took a 59 – 48 lead into the locker room for halftime, one of the forms of entertainment was a dunk contest between kids at half court. They couldn’t have been more than 7 years old and I doubt the rim was even 5 feet. Well, one kid attempted a dunk that apparently wasn’t that appealing to those in attendance and the kid was showered with boos. So much so that the PA announcer had to remind everyone that “we don’t boo kids here at The Garden.” Pardon me, that had absolutely nothing to do with the game but I thought it was worth pointing out.

As usual, the Knicks teased the fans and made it close late in the game by cutting the deficit to single digits as the “Defense” chants alternating with the legendary sounds of The Garden organs rang throughout the building. All for naught, though.

Since the Knicks have become relevant again, The Garden is much more alive. Fans at MSG used to boo the Knicks simply because it became a part of pop culture, but now the boos seem warranted when they do in fact happen. Also, gone are the “MVP” chants for people on the opposing team which I’ve witnessed first hand as well. The Knicks are in the playoff hunt and The Garden crowd is definitely along for the ride.