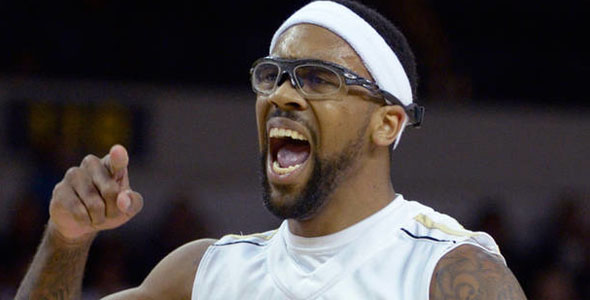 Can you imagine the pressure on the son of the greatest man to ever touch a basketball? Can you even fathom the basketball scrutiny and critique with which he much endure daily? No matter what type of player he would turn out to be, he would forever be compared to his father.  If nothing else, Marcus Jordan has shown so far this year that he has game and that he can lead a squad. Jordan’s University of Central Florida Knights have quietly gotten off to a 14 – 1 start this season and that’s thanks in large part to him.

UCF is off to their best start in their Division I history and are one of only seven teams to be undefeated after their first 14 games, before losing to Houston over the weekend. In a game last week against Marshall, MJ 2.0 dropped 26 points including 18 in the second half. Before their winning streak came to an end a few days ago, Jordan reacted to the attention the streak was receiving:

“We’re trying to not even think about the streak. We just want to go out and win the next game. Whenever the streak ends, it ends. But we’re trying to keep that from happening.”

Defense is actually what propelled the Knights to their hot start. In that same game against Marshall, UCF held them to under 30% shooting from the field and UCF had 11 total blocks as a team.

“Our defense has been our staple all year long and that’s the thing we’ve focused on. Everybody thinks we’re an offensive team, but the thing we preach the most is defense”, said head coach Donnie Jones.

After enduring an investigation this past summer due to an alleged gambling incident, Jordan, a sophomore, who has led the team in scoring seven times this year, is the Knights’ leading scorer at a 16.3ppg clip. That is more than double his freshman output of 8ppg where he earned a spot on Conference USA’s All-Freshman team.

The team just recently lost to Houston over the weekend, 76 – 71, but they are off to a blistering start. While not quite his father, Marcus has definitely shown that he has similar leadership qualities as the elder Jordan. In fact, earlier in the year, he also showed us that he can certain get up too.