Do you long for some great throwback NBA and NCAA footage of superstars of the past featuring some of the game’s best players? Do you miss watching games in which the jump shot was an art form and not an afterthought? Longing to see some of the hardwood’s greatest grudge matches of teams wearing some of the league’s ugliest uniforms? If you are a fan of the game from back in the day, this is the series for you. Welcome to Vintage Video.

Back in the ‘99-’00 season, the NBA was going through a sort of, changing of the guard, so to speak. Aging longtime superstars like Michael Jordan, Karl Malone, and Charles Barkley were at the tail end of their illustrious careers while the younger generation of more outspoken players began dominating the league like Allen Iverson, Tracy McGrady, and Shaquille O’Neal. 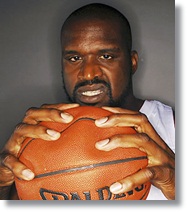 Charles Barkley was, and will forever be, one of the game’s best all-time players and most outrageous personalities. During his heyday, the “Round Mound of Rebound” used his blue collar work ethic along with an at times, nasty disposition to dominate the painted area and transform himself into one of the premier rebounders that the NBA has ever seen. To put things into perspective, one needs to look no further than his career 11.7 rebounds per game average. Not many of today’s players can boast of averaging that for a season, let alone for a career.

One such player who can is the indomitable Shaquille O’Neal, who during the ‘99-’00 season was thriving under new coach Phil Jackson’s triangle offense. He would go on to win the league’s scoring title(29.7 ppg), finish 2nd in rebounds(13.6 rebs), and 3rd in blocks(3.0), enroute to winning the MVP Award. At the time, and in the best shape of his career, O’Neal was undoubtedly the game’s most physical player.

So when two of the NBA’s strongest willed players came face to face over what was perceived as a hard foul, fans in attendance were sure to get a front row seat to one of the NBA’s most memorable brawls in the past 20 years. Watch as O’Neal lightly fouls Charles on a lay-up, Barkley then takes exception and rifles the ball off of big Shaq’s dome, with an all out melee to follow. After taking a swing at Charles, O’Neal pulls Barkley to the ground as if he is emulating Jake “The Snake” Roberts’ famous DDT finishing move(for those of you fans of the WWE). But while on the ground Charles manages to get in two good closed fist shots to Shaq’s dome. In the end both were ejected and both coaches given technicals for arguing their players’ cases. Unfortunately for Barkley, this was pretty much the last bit of excitement we would see from the 11 Time All NBA Selection, since he ruptured his quadriceps in a game in early December of ‘99, and returned only for one game as a tribute before retirement.

I guess it’s a good thing that Brian Shaw and Cuttino Mobley were able to restrain the two before any real damage was done. As for Lakers fans, because of the ejections, they got to catch a glimpse of John “Spider”Salley in live game action. Wasn’t he 45 years old by then?