The NBA to its Players: There’s No Crying in Basketball

Anou Enright September 27, 2010 Blogs, Kevin Burke No Comments on The NBA to its Players: There’s No Crying in Basketball 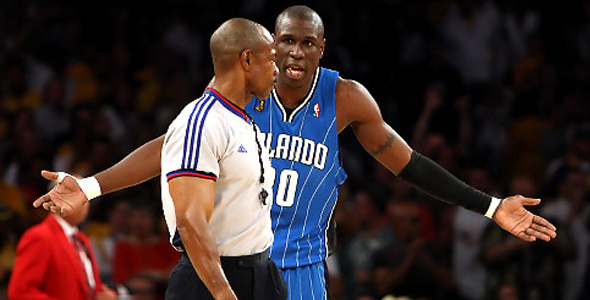 If you’re tired of seeing players complain and cry to the refs about calls that they disagree with, you’re not alone. Apparently, so is the NBA. This coming season, the NBA will crack down on player tirades. Referees will not tolerate players lashing out or expressing themselves in a way that may be deemed as disrespectful or that may slow down the game. This means that there will be more technical fouls and subsequently, more ejections.

If this feels like Deja Vu, that ‘s because it is. The NBA tried this a few years ago. If you remember, when this league-wide mandate was put into place back in the 2006 – 2007 season, there were a bunch of technical fouls being called at the beginning of the season. But as the season progressed, that tapered off. That was partially because the players eventually filed an unfair labor practice charge against the league with the National Labor Relations Board. As a result, the whistles blew a little less.

There is going to be some gray area as far as what will earn you a tech, but here are some sure fire causes: waving off an official as a sign of disrespect, running up to an official from across the court, waving arms in disbelief or jumping up and down in disbelief, and clapping sarcastically at an official.

Addressing why the league has decided to make this initiative again, Stu Jackson, Executive Vice President of Basketball Operations stated:

“Why are we doing this? We just want to have everyone take ownership of how our game looks and the image of our game, and send a message that we want player complaining to be minimized and for everyone to have respect for the game. Our fan research shows that people think NBA players complain too much and they do so much more than players in other leagues. But that aside, in reviewing our games, what we have observed is an excessive amount of complaining to referees’ calls or non-calls.”

I’m all for any initiative with the objective of improving the image of the league, but this is set up for failure. If this is supposed to be more strict than the mandate from a few years ago, they should allow more guys on a roster because we are going to see ejections left and right. They are asking these guys to shelve their emotions. Basketball can be a very emotional game and it’s tough to not get caught up in the moment. This is a very sticky situation. This also assumes that refs get every single call right, which we all know isn’t the case. Yes, guys do cry about calls, but if there’s a call that the a ref blatantly missed, I can’t fault a guy for getting upset. Let’s just hope ejections as a result of this don’t impact meaningful games.

And for what it’s worth, NBA players don’t necessarily complain more than other leagues. It’s just that faults of the NBA are magnified more so than any other league for whatever reason. Subtle difference.