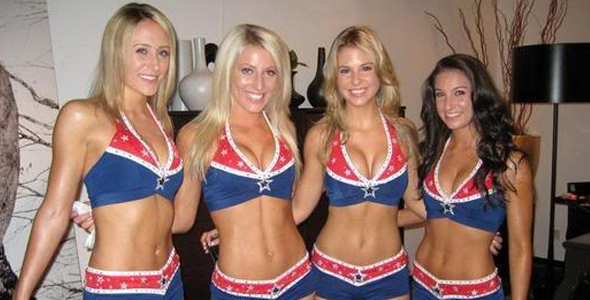 I could not believe my eyes when I read the headlines from the New York Times this afternoon reporting on the FIBA World Championship game between Team USA and Iran. Cheerleaders being told to cover up? Doesn’t that sort of defeat the purpose of the cheerleaders?

Cheerleaders donned black leggings and white T-shirts for a World Championship basketball match between Iran and the United States in Istanbul on Wednesday to respect cultural sensitivities.

Some Iranian officials still left the arena shortly before their routine began, however. At previous matches officials had stood up and turned their backs.

Cheerleaders were missing altogether from Turkey’s last two matches in Ankara, raising eyebrows in the overwhelmingly Muslim but officially secular nation, particularly as scantily-clad cheerleaders had been present at other matches.

Patrick Baumann, secretary-general of the International Basketball Federation (FIBA), said “special arrangements” had been made with the dancers’ dress on Wednesday.

“We want entertainment to be part of the basketball game. If it needs a little bit of adjustment that is fine with us,” he told a news conference.

“It is a balance between respecting the culture and making sure basketball delivers all the pace, excitement and entertainment that goes with the World Championship.” {via NY Times}

Last I checked the cheerleaders at these world events weren’t gymnasts doing back flips and such like in the movies. Instead of ‘Bring it On’, it’s more like ‘Let’s Get it On’. These girls are basically dancers who look good in short skirts and tight tops for the fans entertainment. If Iranian officials or FIBA or whomever has a problem with cheerleaders, than just leave the arena or keep turning your backs, but please don’t take it out on the fans by asking them to cover up. Serenity now….