Carmelo Anthony to the Bulls for Joakim Noah? 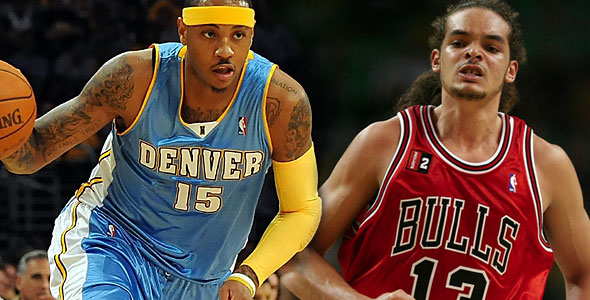 The summer is usually very quiet for the NBA. There are the dog days of summer for baseball, and then football starts to heat up as the summer winds down. Both of which contribute in making basketball a distant thought. But this is isn’t just any summer. This is the summer of 2010. Basketball fans have been awaiting this offseason for a few years now and it certainly did not disappoint. We’re almost half-way through September so the flurry of free agent moves have certainly died down some, not the mention the fact that summer is literally almost over. But, hold on just a second. We have another potential move to talk about. The Chicago Bulls are reportedly interested in trading for Denver’s Carmelo Anthony.

Carmelo Anthony is a rare player. In a good way, that is. While not necessary blessed with mind-boggling athleticism, he is still one of the top 3 offensively gifted players in the NBA in my opinion. He scores with relative ease. Many guys rely on their athletic ability to fill it up, but ‘Melo does it with basketball savvy and uncanny fundamentals. At only 26 years old, he’s just entering his physical prime as an athlete and is definitely a franchise changing player.

With the recent acquisition of much needed low post help in Carlos Boozer, and the next best point guard in Derrick Rose, the addition of ‘Melo would be very scary for The Windy City faithful. That would give them a legit low-post presence, a legit point guard and an legit wing player. What more could you ask for? With the new look Heat, an overlooked Orlando Magic squad and a veteran Boston Celtics team, you could throw the Bulls in that conversation with ‘Melo. As currently constituted, I believe the Bulls are a 4 seed in the East, behind the aforementioned (I think they’re better than the Hawks now). With ‘Melo, they could be anywhere from a 2-4 seed.

But let’s be for real. Carmelo probably isn’t going anywhere. He’s been rumored to go just about everywhere this summer aside from back to Syracuse. It would be a very interesting cap for this historic summer of blockbuster moves, but I’m not holding my breath. I don’t believe it will happen for two reasons. One: With the new bodies in the front office in Denver, they will do everything in their power to try to convince ‘Melo to sign that 3-year, $65M extension that they have offered him. He has until June 30, 2011 to do so which gives the Nuggets plenty of time to place some guys around him. However, if the don’t, they could lose Carmelo to free agency and be left with memories rather than the career 25 ppg man. Reason two: Joakim Noah.

ESPNchicago.com has reported that a source close to the situation (whatever that means) said that Joakim Noah will not be involved in any deal to get ‘Melo. Wow. I was speechless when I first heard that. I’m sorry, but that’s not good business. That’s not a wise decision in trying to improve a roster. Joakim Noah is a solid NBA player, but come on. We’re talking about possibly getting Carmelo Anthony. The Bulls are extremely high on Noah and I’ll definitely agree that he has come a long way of late, but at the end of the day he’s a glorified role player who is an undersized Center. I don’t understand the infatuation with his game to where it would deter a move to bring Carmelo Anthony to town. I think it’s inarguable that the Bulls would be a better team with with the addition of ‘Melo and subtraction of Noah, than if they had Noah and no ‘Melo. The Bulls seem willing to involve Luol Deng in conversation, which makes perfect sense because ‘Melo would replace Deng in the lineup. However, the Nuggets are reluctant to absorb Luol’s exorbitant contract.

We’ll see what comes of this but I expect Carmelo in powder blue and gold this season.