‘KJ Farfan’ The Best Under 5-Yr Old Baller in the World is Back! 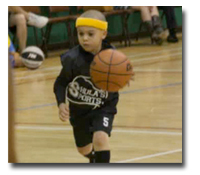 Since the last highlight video of KJ Farfan we showed you, he has been featured in his local newspaper twice, sports magazines twice, and been invited to several high profile youth basketball camps. He now plays in an U9 ( under 9 ) & U8 ( under 8 ) league & is on a highly competitive U9 travel team. Since our last feature he’s also proven to be a winner on the court by taking down two more local championships.

On a daily basis this 5-year old phenom plays against kids that are 8,9, and even 10 years old. All of this and he hasn’t even started school yet! He will be starting school in Kindergarten this year. Check out ‘KJ’ on Facebook or Twitter.