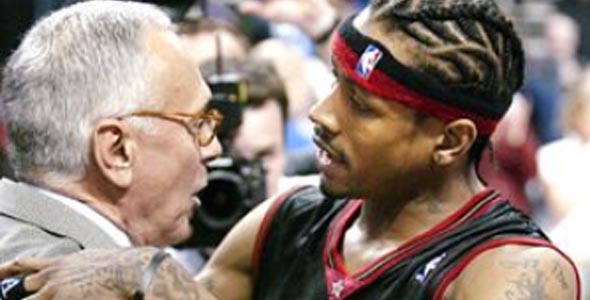 There have been a lot of big names changing locations this summer in the NBA. Shaq to Cleveland, Sheed to Boston, Artest to LA. Aside from possibly Kobe Bryant, is there a more globally recognized name among currently active players than Allen Iverson? The man still hasn’t signed for next season, and it’s all anyone following the sport can talk about. You’re on one side of the fence or the other. You either believe he’s still an all-star caliber talent who needs to play in the right system, or you believe he’s a washed up, has been, scorer with an attitude.

Well, it’s no secret that I agree with my colleague Doc J-Water in believing that Allen Iverson is still a valuable asset to an NBA franchise. He puts butts in seats, and the man is less than a full year off being one of the top offensive talents in this league. The man has a lot left to offer.

Our colleagues over at Dime Magazine are reporting they have an NBA source that has confirmed Allen Iverson has finalized and agreed in principle to contract with the Charlotte Bobcats for next season. The details of the contract have not been released, so we are left to speculate. And speculate we will. The word is that the announcement could come as soon as early next week. But we don’t want to jump the gun, so we won’t give you much analysis of the back story until it is announced officially. Some things racing through my mind initially however….

Allen Iverson reuniting with Larry Brown to possibly put in a final chapter to their roller coaster ride of a HOF Coach/Star Player that has defined their relationship. These two have had some rough times together but they’ve also had some amazing times. NBA Finals, MVPs, COYs, and more.

If this deal does go down. How much sweeter could it be for Allen Iverson than to end his career playing for a boss who was once the man he worked so hard to avoid being measured against. Think about it. Allen Iverson playing for Michael Jordan’s team. Remember the now infamous cross-over by a wet behind the ears budding star in Iverson? How about the statements about ‘not wanting to be like Mike’ early on? Has Allen Iverson finally matured to the point where he can help lead this talented Bobcats roster into the playoffs. Will he accept a diminished role? Does he need to? How will Raymond Felton handle the challenge?

So many questions, so little time. I’m hoping this one gets finalized. I’d love to see it play out. Iverson, Jordan, and Brown in Charlotte. Love it.