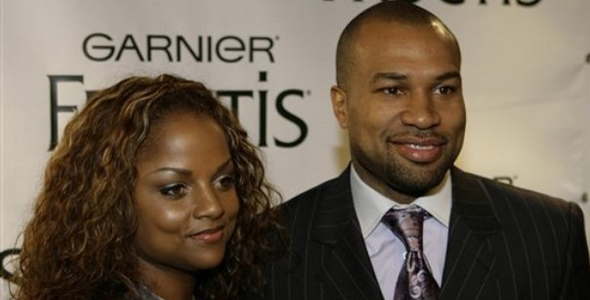 News is breaking that Derek Fisher, the starting point guard for the Los Angeles Lakers, has recently had to request a restraining order against a 40-year old woman from Los Angeles who has been stalking him. Apparently the woman may have a case of the crazies, as she has been pretending to be Fisher’s wife, and has accounts on Twitter, MySpace, and Facebook where she makes these claims. She has even listed herself as “The Real Mrs. Fisher” on these social media sites.

The woman, known online as “Symone Fisher” has apparently not stopped at just sending letters, emails, and phone calls, but has also gone right to Fisher’s house on multiple occasions. Her actions have apparently scared his wife and kids to the point of having to file for a restraining order.

TMZ is reporting that the woman has gone as far as changing her last name legally to ‘Fisher’ in order to further her charade of being Derek Fisher’s wife. Symone Fisher is also claiming to be the ‘real’ mother of his children.

In Derek’s declaration, he says Symone:

“has repeatedly expressed anger and hostility towards me and my family.” He adds, “Given this harassing and stalking behavior, I believe that any sort of further escalation at this point would put me and my family in danger.”