Kevin Durant Out For Game 6 With Right Calf Strain

Anou Enright May 9, 2019 Blogs No Comments on Kevin Durant Out For Game 6 With Right Calf Strain 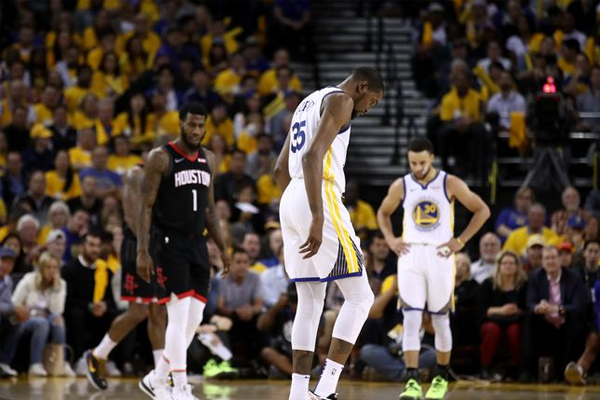 Kevin Durant left Wednesday’s Game 5 against the Houston Rockets with a non-contact injury after taking a jump shot.

Durant, whose recent play has vaulted him into the best player in basketball debate, will be out for game 6 against the Rockets.

“Disappointed for him,” Kerr said. “Excited about the win but concerned for Kevin and disappointed for him. He’s been on this incredible playoff run and I’m proud of our guys for pulling the game out. We’ll see how Kevin’s doing tomorrow.”

The 10-time All-Star forward will undergo an MRI on Thursday.

Durant finished Wednesday’s game with 22 points, five rebounds, and four assists in 32 minutes before departing. Golden State held on despite Durant’s absence to win 104-99. The Warriors take a 3-2 series lead.

The Warriors, who are seeking their third consecutive NBA title, lost DeMarcus Cousins to a left leg injury during Game 2 of a first-round series against the Los Angeles Clippers.

If needed, Game 7, will be played at Oracle Arena on Sunday.