Anou Enright January 23, 2019 Blogs No Comments on The Dieng Booker Altercation Almost Made it to the Locker Room 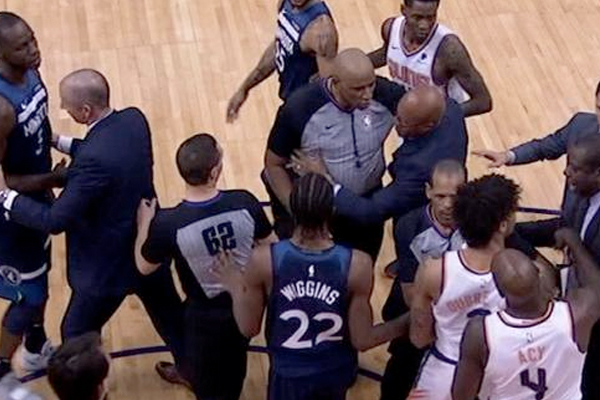 Things got a little heated on Tuesday when the Suns hosted the Timberwolves.

In the third quarter, Devin Booker and Gorgui Dieng were involved in an on-court incident. The two players confronted each other and Booker put his hand in Dieng’s face and appeared to shove him. Now fights happen from time to time, but even a site for the best NBA picks wouldn’t have predicted it continue off the court.

Both players were ejected, but it wasn’t over yet. As they were being escorted off the court, Booker told Dieng to meet him in the hallway.

Gorgui Dieng and Devin Booker were both ejected after an altercation and decided to settle things in the tunnel: pic.twitter.com/J1kHrOLPFz

Booker then had to be held back as he was running off the court.

Both players got ejected ?pic.twitter.com/LSgJkle44h

Security was on “high alert” and “both locker rooms were locked to prevent anything from happening, but that didn’t stop Dieng from trying. He fought off two security guards and got within 15 yards of the Suns’ locker room before being restrained.

Dieng joked that he just wanted “to exchange jerseys” with Booker and he defended his actions and questioned the reasoning behind his ejection claiming Booker was the instigator.

“I think he tried to hit me,” Dieng said. “Everybody could see I didn’t throw a punch. In this league, a lot of guys think they are tough, and they are not.”

Gorgui Dieng on his confrontation with Devin Booker: "I just wanted to swap jerseys with him" ? pic.twitter.com/YxUNeIqCSD

Don’t expect a repeat of this Booker-Dieng altercation because the Suns and Timberwolves will not be seeing each other again this season.